It's been an exhausting and emotional first week back in Haiti as we begin to deal with the Haiti earthquake aftermath. As well, there are ongoing medical, dental and housing needs of staff and students, and even our small dog.

I've made a list of some essential items that are desperately needed here in Cap-Haitien as soon as possible, as well as tools needed by our apprentice carpenter (and our own staff).

Here's a google map  to show the location of some of the towns and villages I talk about. Click on it to enlarge, then click the back button to return to this post. From Cap-Haitien to Sen Rafayel (St Raphail on the map) is about 30 km (18 miles). 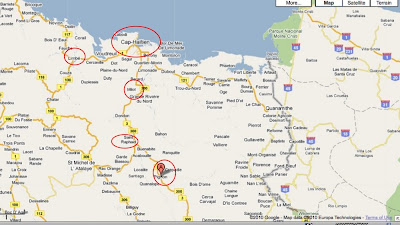 Rain and Aftershocks
It's rained the past three nights, but today (Saturday) it's all bright sunshine. Bless everyone who's sleeping outside for fear of another quake, and trauma from all the aftershocks.

Wednesday night I woke just after midnight (early Thursday morning) for no apparent reason, only to learn later that there had been a Mag  4.6 quake west of Port-au-Prince. 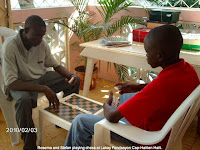 Alland and Wisly (student nurses at Leogane) stayed here at the center all day on Friday as usual and towards closing time, they asked if we could help them go en deyo (to the countryside. Here, en doyo means 'to Sen Rafayel').

When we asked why they wanted to leave Cap-Haitien, they gave the same reasons given by Bruni and Martha and many others: They cannot sleep, cannot stay inside, they feel the earth move, and hear the screams, still.

We send them of course, but I have a feeling they'll be back soon as the horror has subsided.The change of place may help them for a while. I hope it does.

Plenitude was back again from Port-au-Prince yesterday, and I noticed some 'survivor guilt' creeping into his conversation: "Why were those in the morning  classes spared, and those in the afternoon classes killed? The professors had so much to give," he said. It should have been him instead.

This, I think, is just the beginning of a long road back. We have decided as a group that Haiti will never be the same. Haiti is a different country now. Some very deep observations from some very amazing young people.

Sen Rafayel Student News
Claudy and Fabiola arrived from Sen Rafayel as did Djohn. Djohn had stopped his apprenticeship with the carpenter when I became ill in September 2008. Of course, now he wants to resume and complete his training.

Claudy had a list of problems from Sen Rafayel. Guilene (who was pulled from the rubble after being buried for 6 days and has infected wounds) had been in hospital in Pignon after her return from Port-au-Prince and is now at Dr. Anne's clinic in Sen Rafayel, and owes money for both.

Danius Joseph arrived with papers for a new University in Cap-Haitien, where he had started classes in October -- a  4-year program in Sciences Administrative. He had paid inskripsyon (which lets you begin) and nothing more.

Bethany needs her tonsils out and wants to go to Sacre Coeur in Milot. This would be my first choice for her surgery as well.

Benousse has several teeth that need immediate attention. The closest dentist is at Bienfaisance Hospital in Pignon.

Another dozen young people arrived at our center here, looking for food and rest. Two of them have colds, and one has malaria.  I have to say I was relieved when 5 o'clock closing time arrived.

The kids are telling me that they are avoiding Cap-Haitien's downtown core (this includes the market and hospital) as there are so many amputees around the hospital and strangers. The fear of violence is beginning to seep into conversations. 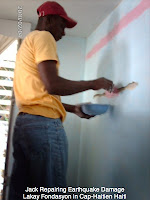 Auguste (director of education) is on forced holiday for a week. I hope it is long enough for him to regroup. He was completely wiped by 5 p.m. He has lost so much weight, not like him at all.

Jack (director of operations) will go on leave the week after. Although we have houses to repair, I have to think of the well being of the staff. They are burned out.

It was too much for them to take over in my absence, and the trauma of the past few weeks has only added to their burden. No one complained but the result is quite evident. Everyone in Haiti needs healing.

Things We Need
Now it's Saturday, and night security has departed and the weekend shift is here. Rosenie and I are working on the dispensary cupboard today. We've started a list of items the kids have asked for that we don't have on hand.

Once the cupboard is organized and clean, we'll head into town and scour the pharmacies. It seems like there must be a million of them!  Each pharmacy is a space about 4x4. Sometimes there are several in a row, each carrying different items.

Saturday, we were able to buy sanitary napkins and the last package of garbage bags in the city. Money allows us to purchase in Haiti some of these items on the list, and for the rest, we make do.

We also could use everything Djohn is in need of as our tools are falling or have fallen apart from constant use. Work gloves are very important as we begin to repair roofs.

Shipping Supplies to Haiti
How to get the things we need to Haiti is another question, as the docks at Port-au-Prince being used for humanitarian purposes and the port at Cap-Haitien is barely functioning.

Anyone interested in shipping some of the things we need could ask Maybelline (AT) shiptohaiti.com (the owner of CASXpress www.shiptohaiti.com) if they are getting anything in to Haiti. Perhaps they are using Cap-Haitien again.  If they are still shipping, ask her how long the turnaround time is.  I imagine their warehouse in Port-au-Prince was destroyed as the Dock area was hit hard.

Florida, Turks and Caicos, Bahamas, Dominican Republic
If you are coming somewhere close to Haiti, perhaps look for a shipping route from one of these destinations.

Hydro, Food, Sick Puppy
On Friday I rose at 5 a.m. despite the urging of the rooster at 4 a.m. In the darkened kitchen (no electricity, of course), I stepped in a puddle the size of Lake Ontario (almost - some exaggeration).  The flashlight showed that the fridge door had opened during the night and everything inside was wet and on its way to culturing exotic microbes. With no hydro, we put blocks of ice in the fridge, using is as a large cooler.

Thankfully night security was up and sweeping so I called for reserves. As Gaby removed items from the fridge, I prepared food dishes for the insistent cat and dog. The dogs are an excellent alarm system, and our remaining cat, Lucy, does a good job of mousing, etc to help keep the house clean.

Our smallest dog Ti Sab (Little Sandy), was missing from the pack and I went looking. She was very ill when I arrived here last weekend, and we had been anxiously looking for a vet or someone with vet training all week.

With so many other things needing attention (120 young people, a house with earthquake damage, an exhausted staff), I had resorted to an 'Ask a Vet 'website. It was my first and last foray on the internet for vet support. The one free question would be answered only after I provided a credit card number which would only be used if I was satisfied with the answer. When I declined, there followed a barrage of emails.

Ti sab, who had been shaking so badly we had to hold her food and water bowls for her, could not stand up. I tried to phone Jack but there was no cell phone signal. I made her as comfortable as possible and proceeded with the fridge clean up. This generated a sink full of dishes to wash of course.

Finally I got a phone signal. Jack contacted Jud who gave him directions to a man he knew who had vet training -- no address, no phone number, just directions. Because the location was in the interior of a katye (zone), Jack set off with the dog in a box to find a motor scooter. The vet (Tony) says to bring the pup back on Sunday by 6 .am.

And so my first week back in Haiti is finished and I'm still standing. We face a daunting time as we rebuild and regroup. Good news though. I am now bandage-free, with my last wound now healed.

Housing in Haiti
For those of you who have contacted us for help looking for housing in Haiti for friends and relatives displaced by the earthquake, please understand how difficult it is to find housing of any kind at this or any time. So many people are coming north to Cap-Haiiten that resources are stretched to the limit and beyond. If we hear of any available housing, we will let you know.

Thank You!!
Thank you all who've sent financial help our way. We know we won't be able rebuild the country or even our little part of it, but we will keep on working to help as many as we can, as much as we can. We DO  make a difference  to so many lives. Thank you all!

On a personal note, I rediscovered Anne Trenning's lush CD All One World last night. It's been so long since I was at home here, I had forgotten its existence. Fortunately I also found 2 batteries for the little CD player. The CD was a gift from a visitor about 4 years ago . What a gift! Celtic stylings on piano: Food for the spirit. After yesterday (Friday), it was a welcome respite.