Back in Cap-Haitien, New Truck, Students' News, Needing a Back Brace 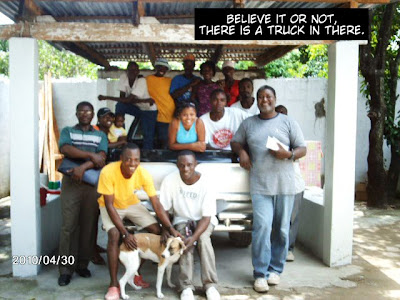 It's been just over 10 days since I arrived home in Cap. And what an arrival it was! The truck makes it possible for more folks to travel (students, staff, dogs) so I was greeted with a joyful, chaotic scene as I emerged from customs. Jackson, our driver (chofe-a) has been serving as driving instructor, so Auguste drove home from the airport. He was calm, cool and collected - a gift in the often intense Haitian traffic (sikilasyon). We drove into a center bustling with activity as Sunday morning is our food distribution day. Rosenie, Sherlyne, Stefan and Joceline had been at work since 7 a.m. - their choice. The early morning hours are cooler. It is comforting to know that programs continue to function smoothly in my absence. 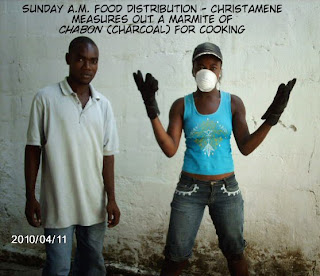 Sherlyne asked to speak with me at the end of the day. Her aunt, in Port-au-Prince, had been injured in the quake on Jan. 12 and lost her house. She died on June 18th - age 35. The quake (trambleman te-a) is still claiming victims, and the ripple effect is still taking place. Sherlyne's aunt had been paying for her younger sister to attend school here in Cap. Edwige is in 9eme, preparing to write state exams. We sent the two down to Port-au-Prince for the funeral and will see if we have the funds to take her on full time in September. Sherlyne has been dealing with an H. Pylori infection and became quite ill. She ended up in hospital in PAP and has yet to return. I will ask what hospital was able to accommodate her and what the conditions were.
The centre has been a study in contrasts - over half of our young people are entering the homestretch - studying to write State National exams July 26-29, so there is quiet concentration. On the other hand, Haiti is soccer country, with support being split between Brazil and Argentina in the World Cup. We go from the profound silence - students sitting on the gallery, the roof, the corner patio, or just wandering around muttering to themselves, to the absolute amazing uproar from the whole country whenever a match is on and someone scores. The sound of the word 'gooooooal' is seared into my brain.
And 'mirak d'ayiti' (miracle of Haiti), we have been given electricity EVERY DAY since my arrival - in honor of the World Cup, so I am told. I have much to learn - I know that we're 'fanatik' about soccer (fouk[t]bol) but did not realize that the sport had the power to light up the country. Point of clarification - every day does not mean without interruption - but it is gift.
More Student News
Rosenie has finished exams, so she has started the Book Repair program. In addition, she has begun to scour the market for new backpacks. They have to be a decent size to accommodate the load of books needed by each student. Also new is necessary. We have found that even gently used backpacks breakdown quickly and we have to replace them within a short time.
We have 10 students on the waiting list for summer jobs. There are already 6 working. There will be more. The delayed exam timetable means the books will be later coming back, perhaps depriving some of summer employment. 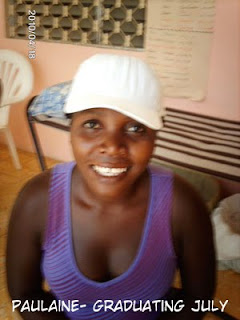 Paulaine is busily completing her sewing assignments as she graduates from her 4 year cooking/sewing program on July 25th.
Claudy came down from Sen Rafayel Friday for funds for the 20 students writing State National Exams there. Everything has a price tag. The good news is we will be able to travel to Sen Rafayel to pick up text books and deliver clothes and shoes now that the truck is here.
Djohn's hernia surgery has been set for July 8th at L'hopital Bienfaisance in Pignon. We have sent funds and meds with Claudy.
Kesner, Camiose, Mona and Marie Modeline all arrived with diagnostic result and prescription forms, so I'll take a break and help Auguste.
I'm back.  A huge thank you to Paula in Pennsylvania for her tenacity in tracking down a Perkin's Brailler for Guilene (see last post). We are hoping the 3 machines arrive before she writes exams but if not, we know they are coming.
Thanks also to Sister Rosemary for securing a new stethoscope for Micheline (medical technology). Micheline informed me that she also needs a French Medical dictionary and a complete Glucometer kit. If only I had known when we were looking for supplies for the nursing students.
Timing is everything. We are still in need of used laptops with Wireless for all post secondary students. Thanks to Cindy and family in Inglewood, Canada for donating one. Daniel will bring it when he comes to visit. 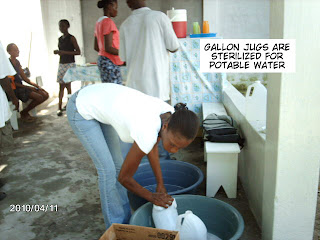 That's about it for now. Auguste and I are flying down to Port-au-Prince on Thursday for the capping ceremony (kwaf-la) for our 4 nursing students. We had planned on driving but last week's storm (which is now called Alex) further damaged the Route Nasyonal at Gonaives so flying is the fastest and most reliable method of transport. We will deliver the supplies so generously donated by Corinne, Peg and Mathieu. Thank you again everyone for taking these young people into your hearts.
Talk to you next week -I'll take pictures!
Kenbe
Sharon 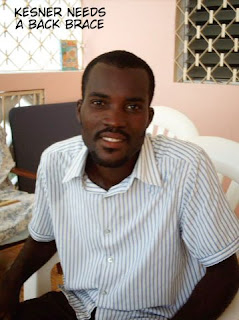 PS. Kesner has a back problem and is need of a brace - if anyone is able to find one.
Posted by Starthower Founder at 9:56 AM 5 comments: