"Wherever I am may I be open to inspiration and truth."
(The Third Rule of Ten by Gay Hendricks and Tinker Lindsay)

Sometimes nuggets of wisdom jump out and bite me -- I don't even have to pan for them, and often they contain pure gold. Books have been companions since I learned to walk and talk. Being an introvert and a shy one at that, reading was my refuge growing up. But for the last year I have been unable to read. So many changes... thanks to the Jasmine Foundation a new home in Cap-Haitien with all the joys and headaches that go along with moving into someone else's idea of how to use space and the lack of responsibility making needed repairs for the new owners --us. Many sleepless nights and difficulty finding focus.

That's just in the city. Up the mountain the challenge of building a quake proof security wall, digging a well, tearing down and rebuilding a weakened garage wall. And while dealing with all of this, 150 students dropping in at both centers, getting ready to write exams. And outside, hundreds of young people (at both locations) who have been unable to attend high school for economic reasons hoping for the opportunity to deliver a letter requesting admission to the center.

I introduced some of those young people in the last blog and on Facebook. Today more hopefuls to look beyond the smiling (sometimes) photograph. They are sad, frightened, hopeful, angry, defensive, apprehensive, tired, thirsty, hungry, dirty, often ill.  I have seen all of these and more. The fear is palpable.

The nugget of wisdom that spoke to me came from a series of books that broke through my lethargy and got me reading again.  The series is called the Rules of Ten.  Here is the nugget I mined from The 4th Rule of Ten (ibid).

"When a person starts from a place of scarcity and pain, when there's no psychological or emotional foundation on which to stand... when as a child you've never been seen or valued ...a tragedy waiting to happen...even abusive inconsistent attention is better than no attention at all.'

This resonates with me as I see  longing in the face of every young person who approaches the center for 'soutyen' (support). It presents itself in many different ways, but it all translates to longing to belong, to be valued.


Castho, Mak and Djempson are all 14, Rose is 17. All 4 are orphans responsible for siblings. Djempson's manman died 4 years ago, leaving 5 children. His papa was just 33 when he died.

Mak's parents both died leaving 3 boys and 3 girls on their own with no close relatives.Castho's manman and papa died leaving 5 children.

When Rose-Mercie and her 5 brothers were orphaned, they went to live with an aunt. She died of cholera 3 years ago and Rose has been sitting out of school ever since.

The hunger for education is evident in the letters these young people write. The very act of having to write a letter is a hardship. When you have nothing, where do you find paper and pen, envelope? They wouldn't think of delivering a letter to us if it wasn't in an envelope. And every letter begins with a salutation asking about our well being. Sometimes they squeeze their entire life story on a single page -- all the pain, fear, sorrow. Sometimes it is a brief paragraph with the basics that we need to move forward with the application. 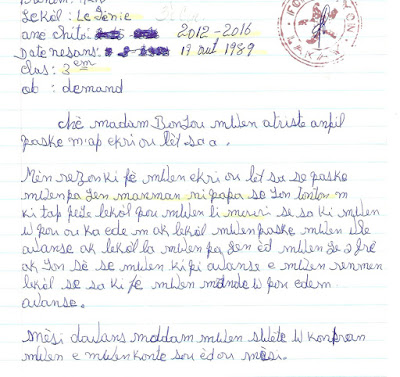 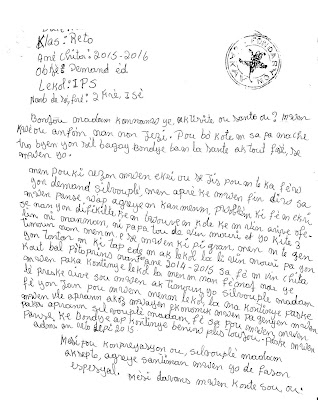 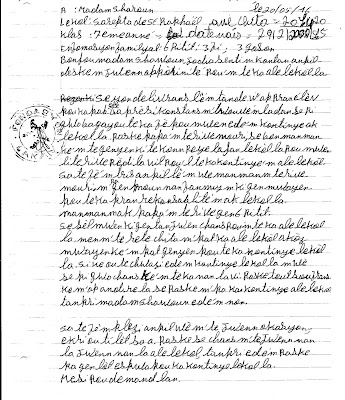 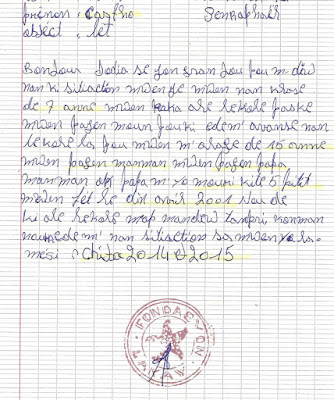 Before letters are accepted they are proof read by staff to make certain we have enough information. Once ascertained, Auguste accepts the letter, numbers it at the top , stamps it and initials the stamp. From there, I create a master list with basic information which allows us to begin the interview process which usually happens within 2 weeks of receipt.  We try our best to expedite the process. They have waited a long time for a chance.

Jean, Robentz and Miselene are all orphans. Each has completed the first year of high school and has been sitting out for 2 years.

Jean stays with a cousin but she has a family of her own and cannot afford school for him. Miselene has 3 brothers and 2 sisters . They went to stay with an aunt but she died also.  Robentz's papa died when he was 9, his mother just disappeared (was lost)  leaving him with 5 sisters.

Posted by Starthower Founder at 10:51 PM No comments: