This is the time of year I panic. I can't leave for Canada -- there's too much to do. Same time every year -- same panic. So, hit the yoga mat, evict the dogs from it first then do a few rounds of Sun Salutations. Dance for 5 minutes. Sit with the dogs. Breathe. Order is restored for now, panic in it's place.

Everything happens at the same time it seems. Nothing is linear. Comings and goings overlap, leaving no time to savor moments, to say proper goodbyes to graduates or proper welcomes to new admissions.

The tradesmen of Sen Rafayel are doing a stellar job of creating a strong, quake proofed security wall around our vacant property. Coming soon -- a safe space for activities with a WELL! Down the road, student housing.
Once all the 'poto yo' (posts) have been poured and dried, the team of masons will be back at work putting a coat of 'krepisaj' on the blocks. At that time, the metal portay (security door -- on track and rollers) will be installed. The boss has started to make it off site. Once it is installed, the space will be secure and the well will be dug at the same time the finish is being applied.
After that the electrician takes over to set up the well pump, wiring and distribution tank.

While that is happening, the masonry team will move into our compound to demolish the rear garage wall which is crumbling, install chenage for strength and put up new blocks. Those materials are already on site.

In addition to the new private space in the works, yesterday we completed interviews for 80 applicants, 2/3 of them in Sen Rafayel. Monday we had sent out word that we would be accepting another 50 letters in the afternoon but when security staff opened up at 5 am, there were already dozens waiting. When day staff arrived at 8:30 the number had grown to well over 500 and although staff asked them to leave and return at the advertised time, no one left. When Auguste and I arrived at 12:30 we couldn't get down our road. It was choked with young people. They rushed the gate and the wall so I got out of the truck and spoke to everyone. It was a tense moment. So much need. So much frustration, anger, sadness, despair, hopelessness -- if you can think of other negatives, it will fit.

Our work is built on respect. We require appropriate behavior from our young people. I told everyone we were not accepting letters that day due to their behavior. When no one left, I started taking pictures and told them anyone in a picture when entered into the computer would have no chance of admission. The pictures below show the handful that refused to leave after we were able to get inside the compound. Finally everyone left.

At day's end, we sat with staff and discussed what strategies could have been employed to defuse the situation. Every situation is new and it is difficult to prepare with so many unknown factors. Debriefing and brainstorming are valuable tools.  The new enclosure will be a great help for the next round of applications. 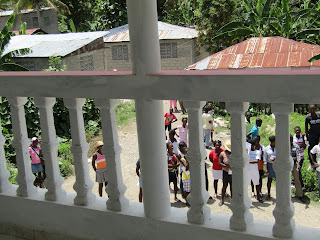 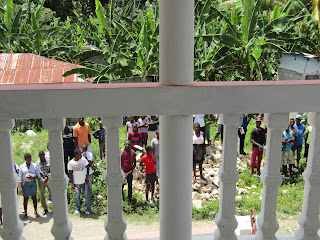 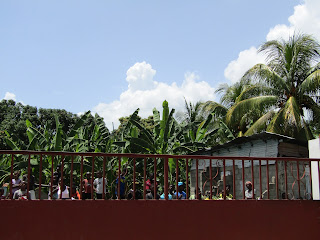 Next morning up with the roosters at 4:30 to get ready for the last intake interviews. Between Sen Rafayel and Cap-Haitien we interviewed  80 students. All but 5 had the requisite papers and those 5 are going back to the school of record to see what can be done. Sitting out of school creates a myriad of problems.
In Cap we admitted our youngest student ever. Wiltana turned 11 in February. She is one of Inea's 6 siblings. Her 17 year old brother Tholin will be in the same class. She has the poise, the confidence and the clarity of speech that I still haven't achieved. Perhaps it comes from being orphaned at a young age and passed around to distant relatives and friends. Or she was just born with it.
﻿﻿

﻿﻿At both centers we have new admissions of every age and grade level. Their stories deserve to be told.  So should the 500 plus who waited for us Monday.

In Sen Rafayel again a range of all ages between 13 and 28 covering every grade level. 13 yr olds Rolex and Youse-Delda will both be in Grade 8 after sitting out a year.

At the other end of the spectrum, as in Cap-Haitien, there are those like our director of education who have been working at attaining a high school diploma for many years.

Each of the 80 we have admitted (5 dependent upon securing legal papers) consider themselves lucky to have received a card which secured an interview. It shouldn't be this difficult to go to school.

The going part is more  emotional, saying goodbye to many who have been in my life for 7 years. All our young people make me proud and our 30 graduates are no exception.  They have worked hard and continue to work hard until the last day of the last exam. Last blog I shared our 13 Cap-Haitien grads. Here are our Sen Rafayel 17.

These young people are so much more than a momentary smiling face caught on camera. Three years ago the local government bulldozed the shack Clenie, her mother and siblings called home. In a single day everything was gone -- and everything wasn't much. She still has no home.

Ralph's dad was a teacher in the village. He died 3 years ago of an undiagnosed illness. Ralph has the highest marks I have ever seen and wants to follow in his father's footsteps.

Angelene has had 2 breast cancer scares and wants to be a nurse.

Wisline is recovering from severe anemia.

Youseline has been waiting since the quake in 2010 to complete high school.

Alexi's dad had a job with a well known international NGO. They just didn't pay him. He died 4 years ago. His mom is battling breast cancer.﻿

Mariline's legs were scalded from knees to ankles 3 years ago. We treated with homeopathics and Natural products. There are no visible scars.

Everyone endured and survived these challenges without benefit of running water, drinking water, a toilet, electricity, a bed,  food every day.....


Everyone on this planet is special and every story important. In Cap,  grad Brunel has written asking if we can find sponsors to send him to university -- he wants to be a teacher. All through his years with us, he has tutored and shown himself to be a natural leader. Like Ralph in Sen Rafayel, this calling is inspiring in a country where educators are not valued.
﻿ 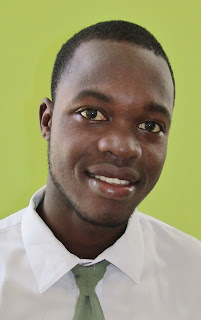 
22 year old Withnise wrote to us asking for support to become a veterinarian. Throughout her formative years she has been concerned about animal treatment and welfare.﻿ 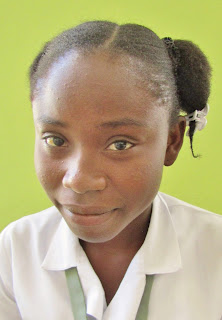 There are more letters requesting post secondary support. I haven't gotten to them yet. In addition to these requests we have former grads Carline, Viola and Paudeline who will be starting University in the fall. The patience of these young people is inspiring. Unfortunately it isn't contagious.

To everyone who has ever invested in these young people, thank you and please keep up the good work. Your investment will pay dividends you may never realize. That doesn't mean they aren't real.

﻿
Posted by Starthower Founder at 5:53 PM No comments:

Everything changes. I'm told life would get boring if everything stayed the same but there are times when it would be comforting to just be.... for more than the present moment.


Both drop in centers are busy, busy. Exam time is rolling around and in addition to our juniors, we have 30 candidates for Philo/Secondaire 4  the final year of high school. Here are our 13 candidates in Cap-Haitien.


Posted by Starthower Founder at 12:57 PM No comments: