Communication is always a challenge here - sometimes its the language, an expression new to me, sometimes the equipment with which one communicates.  I have made many attempts to write this update, each time thwarted by either lack of internet access or electricity or solar power.  Perhaps to-day.  The SIM card on my cell phone gave up the ghost as well, taking with it all of my contact phone numbers.  There is consolation however, I have been able to keep the same phone number. 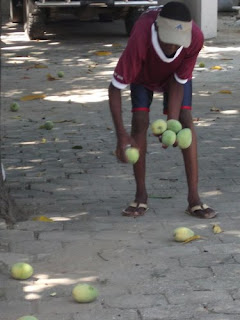 Seasons are beginning to change - the exhaustive summer heat is beginning to level off, mangoes are dropping at a slower rate (Stephen pictured gathering mangoes from our tree), avocados (zaboka) have begun to drop and our book program has moved into its second phase.  We've paid inscription for those with year end results which provides us with book lists.  We have begun to prepare backpacks .  This means a change of staff as well.  The book repair staff have finished and the list preparation staff have begun.  Micheline has a month off from her Medical technology program, so we are able to use her expertise.  She had a successful year and is looking forward to the final year of her program.  State results are trickling in - will update next week.
Sen Rafayel continues to challenge as well.  Our visits bring out hundreds of young people hoping to continue either secondary school,  enter a trade or go on to post secondary.  Often the noise drowns out our interviews. 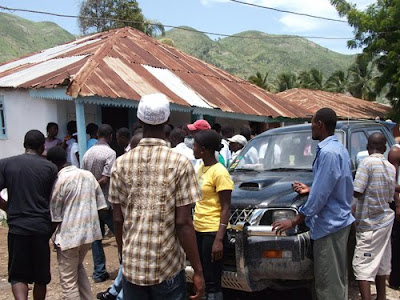 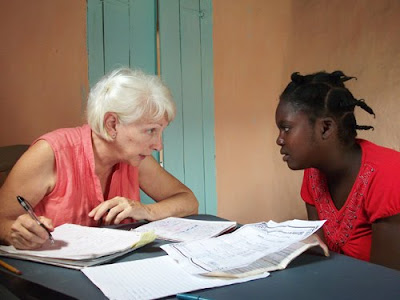 Although we work with teens and young adults there are always surprises - Michaella (on the left) is 11 and needs support for high school, Adminada (below) is 29 and needs support to finish the final year of a couture program.
And the letters continue to touch me - Widlen writes in Kreyol: "Neither my mother nor father are alive.  It was a cousin in Port-au-Prince who was paying for me and he died in the earthquake.  M tankou yon zwazo san branch (I'm like a bird without a branch)."
Myriame wrote also in Kreyol: "I saw life end, passing in front of me in the catastrophe of Jan 12 in Potoprens (Port-au-Prince).  By chance I did not die but those who were responsible for me did die, so it seems my life is over."
Marrion wrote in English, I'm certain with dictionary in hand. The mistake she made was so profound - heart in Kreyol is Ke, earth in Kreyol is te. She wrote: " My father died in the heart quake 12 January 2010.  I'm obliged to address you...could you please help me with this situation."
It was a heart quake - breaking the hearts of everyone here.  And the victims continue to surface.
I have been concerned about one of our girls.  She has been even more withdrawn over the past several months and I suspected pregnancy.  She came to see me Sunday morning.  She was raped by 3 young men in February, returning late one night from Sen Rafayel because the taptap (bus) had broken down on the mountainside, delaying arrival.  She had no money for a taxi and public transit had stopped.  There will be no school for her this year.  She's terrified, frightened, angry - both her and the unborn child victims of violence that continues.
On a final note, I received an email from an American nurse I had met in Leogane.  She had been teaching an intensive course at the nursing school and prepared a beautiful video of her memories of Haiti.  Hope you can take the time to view it.  She has included our young people.  Thanks again Jamille.
Beni tout moun
Sharon
PS. Many thanks to Jackie, Peg and all those who responded to the letters last week.
Posted by Starthower Founder at 8:39 AM No comments: