If Waiting was an Olympic sport, Haitians would sweep the podium.  They wait for everything.  I think if I stay long enough some of it will rub off on me. The question is -- how long is long enough? This school year we have added 61 new and 1 returning admissions. All have been waiting, some for as long as 3 years for the chance to go to high school. Of our 30 candidates who wrote State National exams for Philo/Sec. 4, 29 were successful. 15 of those have written asking for post secondary support for everything from physiotherapy to medicine to veterinary science..

In Cap, we are responsible for supplies for both centers -- purchasing, preparing (covering, numbering, stamping, labeling) textbooks as well as all food stuffs ,  hygiene products  and delivering to Sen Rafayel. Last week we made 2 trips. I had noticed the winds picking up and was enjoying the somewhat moderating effect on the unusually high  fall temperatures. September was hotter than July -- 40 degrees daily and no electricity.  So when we worked, we moved work spaces around to catch the breeze.When there is no electricity we make the space work. Here we are  in the front hallway.


I follow the National Hurricane Center website weekly but as the  NHC showed the brewing storm moving west of Haiti I was just grateful for the drop in temperature. Our trees were constantly being snapped to attention. 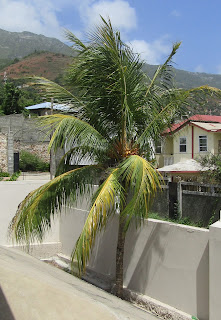 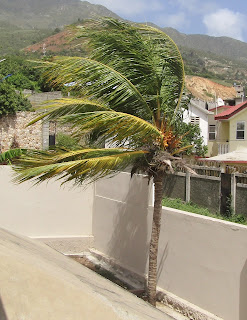 When sick, Haitians  wait  --   to get better or die, so I was told by former students.  We had been sitting waiting in a blokus (traffic jam) one day for several hours and I asked Auguste how he stayed sane. He laughed , shook his head and said  "I'm Haitian. I do what is necessary to keep the peace."

After nearly 19 years with these amazing people, shouldn't some of that have rubbed off on me? Osmosis?

Since arriving back in July our bank has been closed on 4 occasions, most recently last week for Thursday, Friday, Saturday. No warning -- no advertising -- no reason. You show up, it's closed. That not only meant that we had to wait to purchase needed food and  text books but that I would have to stand in line for hours to get our funds. So after waiting for the bank to choose to open, we  wait again -- in a line that extends around the block outside. Standing mountain yoga pose... don't fail me now!

While their patience hasn't rubbed off, the example they set always gives me pause. We had no electricity for 2 months this summer. It has been a long, hot summer.  Then when it was delivered again 2 weeks ago, someone had disconnected 2 of the wires leading to our counter so we were the only house in the neighborhood still without. Wait again -- for an electrician, and by the time he arrived, the electricity had been turned off. They shrug ...

Monday Joceline showed me green water in the kitchen sink ---- it looked like cooked spinach--coming out of the kitchen tap . It was moss.

Gross -- where is it coming from? Our well?  the pipes? Wait for a plumber. This was one occasion when they didn't sit and wait. Instead it became a do-it-yourself project.

Finally the weekend had arrived -- the first and only weekend I had no pressing work to be done. Sunday was my day -- to write a blog, catch up on Facebook , do some much needed yoga. BUT sometime during Saturday night, Matthew became a monster hurricane and veered ever so slightly east putting Haiti  right in his sights.


Waiting for Matthew was a little bit like waiting for Godot. It made about as much sense. And the object of the waiting appeared to not really exist. So, we had  one day to prepare and all large businesses are closed. We had 7 windows that did not close and therefore had to be covered. We had some Cilotex but not enough, so I texted Auguste and he cut short his weekend, went to town and scoured  every street until he found some.

Rosema and Fritzman are our Cap weekend staff so had their first lesson in hurricane preparedness.


Weekend staff left and I waited with the dogs. Joli had a great idea -- hide under the bed.

Posted by Starthower Founder at 7:40 PM No comments: