Hello everyone - Daniel here - due to little electricity, Sharon was only able to send these two quick updates this morning.  I know she is working on a long blog that I hope to receive this week.
____________________
﻿
Electricity just back - internet arrived last night after a week of frustration and long distance phone calls to re-activate our account.  But it's here - just need electricity for awhile.
Jack, Auguste and Carmene have all checked in by telephone this morning. Jack's call took about 8 minutes to go through. There are no public vehicles working and the streets (from staff reports) have erupted in protest to the naming of Jud Celestin as 2nd place contender for the presidency in front of favorite Martelly.
Barricades of tires are burning, there is gunfire, rocks and bottles indiscriminately flying about. The surprise is the geographical reach - Auguste lives out of town in Haut-de-Cap and he can't get out of his katye (neighborhood). Jack is in Laboul, downtown behind the Hotel Roi Christophe and Carmene is near Madeline on the way out of town to Milot, Sen Rafayel etc...
Radio reports of election results placed Celestin (Preval's hand picked successor) third which calmed the anger until this morning when the order was rearranged and Martelly dropped to third.
At some point in time those in power will learn that democrary is going to win out here - maybe not in my life time but the poor will have their day. They know and have always known what this country needs and it is not politics as usual.
...
Hydro back - in 12 years I have never heard such a clamor - it sounds as though every person able is participating in this manifestasyon-an (protest) although I know that is not the case. Our staff value their lives and families as do many. 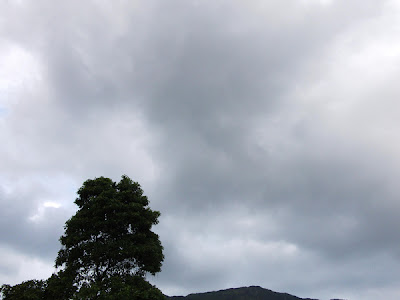 These are not rain clouds over the house, but smoke from burning tires
The dogs are standing watch at the gate - all dogs are barking except ours. They just watch. Joceline arrived as she just lives above us in St. Philomene and does not need to go down to the street. Her children turned back except the oldest. He said he has to write his exam today.
The cacaphony is truly unnerving.
Be safe - more later
Sharon

Update from Sharon: Smoke dissapating - gun fire increasing and closer . Student (Alex) just arrived as closer here than to go home. He had been at a course which required him to leave home at 5 am - before the protest started. Now we are 3 at the house.

Jack just phoned to say they are safe -so glad he made it back home.