Everything is closed in Haiti today to honor the one month since trembleman de te (earthquake). Only churches are open. Hospital Justinien is closed, as are all hospitals and all clinics, so no clinics or hospital consults are available. Also closed / not operating are camionets, taxis, businesses, banks, the few schools attempting to operate.

Jack was unable to purchase water today as the plant is closed.

Joceline had waited until today to take her son to the hospital as she had no one to watch the other kids until today. Her marenn (like a godmother) arrived to look after the kids as planned and off they went at 5 a.m., walking to the hospital because no taptaps (buses) were working, only to arrive then be told to go home.

Carmene just told me that she has heard from her brother in Port-au-Prince. His children are so sick with diarrhea and mosquito bites that he is now in a state of total despair. They are still sleeping on the street in front of the ruins of their house.

He also said that tents had arrived in Port-au-Prince but the gwo neg yo ('the big guys', the top 1%, the wealthy) who receive them are keeping them and selling each of them for $300-$400 Haitian (about $55- $60 US, but the exchange rate can change suddenly).

Whether or not we can verify this news is almost beside the point: It is the talk going around Port-au-Prince, and then across Haiti, and they believe it to be true.

This National Day of Mourning is a day of simmering frustration.  We will make do til Monday.

While I understand the need to acknowledge the passage of time and provide a time of reflection and rest, a full day of closures just aggravates an already difficult situation. The poor who depend on a few gourdes (guds) in the market are deprived of that.

Bear in mind these are MY sentiments and thoughts. 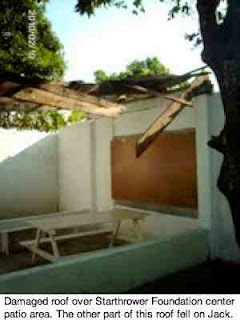 The plumber came back yesterday, this time to fix a leaking toilet. At least the taps are functioning, except that we have no water.

Jack is searching for gas for the Delco, but everything is closed. He will have a friend to help him find some. Thank goodness for friends.

The plumber just returned again today. When I asked why he had just covered up the leak rather that replace the pipe, he said it wasn't just the pipe.

The earthquake te deplase (moved) everything and we would have to dig up the whole floor to replace everything and do it properly. That would mean re-tiling the floor as well. We have poured more than enough money into someone else's house, so we'll live with a leaky toilet for as long as possible.

The Delco is a generator which pumps water from the well up to the cistern on the  roof. The electrician came last week and after digging up the ground and breaking up cement, he replaced the wiring. The existing wiring was destroyed in the earthquake. Fortunately the generator sustained only minor damage which we repaired. The cistern has been patched and we are keeping our fingers crossed. 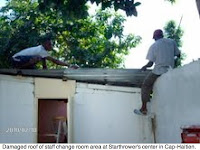 Christamene always works with the crew instead of on book repair in the summer. The wood in our parking space was so damaged that a large piece broke and hit Jack on its way down.

Jack has cuts on forehead, right leg and left arm. Thank goodness I've just had 15 months of 'how to care for a wound' by some of the best medical personnel in Canada.

The parking space had to be repaired as the kids study there. We have a large piece of cilotex attached to the end wall we use as a chalk board. Everything gets used here in Haiti.

Carmene took the damaged pieces home in a taxi to put together the damaged space at her place for some of her many family. We have arranged to send our work group to her place next Tuesday to help with repairs and creating some space. 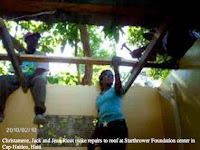 Gaby, one of the student nurses, came in to work Monday at 6.

He was very excited, as he had heard on the radio that there were provisions being made for post secondary students in the Port-au-Prince area to continue studies in US or Canada.

So we talked for a long while. Gaby asked for more work as he is not going to Sen Rafayel again.

When he came down the mountain on Monday, the road was once again gone.

The camionet broke down. He found a motor scooter at Dondon which took him over to Grande Riviere du Nord, and from there he was able to catch a bus to Cap-Haitien after several hours' wait.

This poor country and these poor kids. On Thursday Gaby arrived at 5:45 for his job as night security with a completely different frame of mind. We talked for 45 minutes, another record for him. He told me that now he thinks he should stop working here as he is not normal in the head. I asked him to explain if he could. 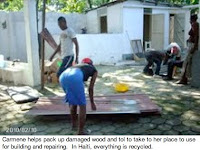 He replied that he hasn't slept since the earthquake Jan.12, and 'Mwen fe mal nan lespri a" (I'm sick in my spirit).

What an apt description of grief and post traumatic stress. I know he's eating at least one meal a day because he eats a good breakfast when morning chores are finished.

Experts say they expect PTSD to set in in about 6 months' time. It's here now. When I see a group of teens sitting on the gallery, arms wrapped around themselves, staring nowhere, not conversing, I can see it's here.

Getting them talking as a group is like pulling teeth. I have more success one on one. If that's what it takes, then one on one it is.

Like others, Gaby thought perhaps staying in Sen Rafayel with cousins and his brother would help. However he tried that last week and he ended up coming here.

We talked about life changing experiences. The Gaby of Jan. 11 is gone, changed by the experience of Jan 12. He nodded, smiled and said that was the big problem. He doesn't feel like himself.

Like the others, he sits up at night and cries. He feels the earth move, he hears the buildings begin to crash, he hears the cries of people injured and dying, he sees the devastation outside the school and sees the wounded coming to the school by the hundreds.

He felt so ill equipped when doing emergency first aid in Leogane, after the nursing school collapsed. Bruni said the same thing: "All we could do was put bandages on those with the smallest wounds."

Hence the hunger to get back to school and learn more, to be better equipped next time something disastrous happens.

Thank goodness for my life skills and thank goodness for speaking the language. And for the simple act of being present. I have been on the receiving end of that gift of presence in my life. I'm filled with gratitude to be able to pass it on.

Well-Intentioned but Misguided Donors
Jack started to talk about what's happening at Labadee (about 8 km west of Cap-Haitien, and close to where Royal Caribbean cruise ships dock. Royal Caribbean is very well intentioned, donating thousands of pounds of supplies to Hatii. However none of it is being distributed. All donations are ending up for sale in the market, and making a few rich.

Similarly, there are media reports about Dominican Republic resorts collecting donations of goods and cash from guests, saying that the resorts will then arrange to send them to Haiti. It's anyone's guess what will happen to them, or how they will get to Hatii, and to whom.

This is where small NGOs like Starthrower could enter the bigger picture. We have access to those in need and to the local officials trying (unsuccessfully) to deal with the swelling crowds from the south.