Saturday should be quiet.

Yesterday the long awaited solar technician arrived from Port-au-Prince (Potoprens). An American trained Haitian who knows solar systems, computers, the internet, and electricity.  He worked on our set up for the better part of a day, uncovering a system which was never properly installed, leading to the suspect terminal breaking off and shorting out.  None of the connections were tight, apparently emiting sparks and causing the batteries to drain rapidly.

In the process of checking everything out, he inspected the wiring system in the house.  "What system?" I inquired as some plugs are 2 pronged, some are 3 and electricity enters via flimsy wires held up by a stick.  Light bulbs continue to illuminate after I have turned off the switch from the power company.  His first suggestion was to change the fuse panel for a breaker panel.  Over the years I have asked 3 different electricians to make this change - none could.  So Jack spent this morning (he doesn't usually work weekends) searching every shop - large and small which might carry electrical supplies - everything necessary to bring this house up to code in any country. With true Haitian tenacity, he didn't quit until securing every item.

As you know, last week we travelled to Sen Rafayel in part to update photos and family information of our students, and in part to make staff changes.  We have decided to move away from students manning the office to hiring 2 of our graduates, Djohn, a carpenter (top photo) and Kesner, a tailor (bottom photo).

Both will have time for office duties, welcome the income and be able to continue in their trade.  Both accepted the job and each received a telephone to keep them in touch with 'head office'.
Djohn is awaiting tools promised from the States to continue his carpentry.

Last week we found a sewing machine for Kesner but lost it because I did not have the cash on hand.  So we wait again.

In the meantime, Joceline and Stephen arrived for their half day of work.  As they entered to the excited barking of the dogs, the phone rang.  It was Kesner.  His younger sister Chemen, 18 years of age had just died.  Could we pay for her 'bwat' (casket)?  In July 2005, his 6 year old brother Djempson died and we paid for the bwat.  Like her younger brother, Chemen had never been to school.  She had taken on the role of mother at age 12 when their mother died.  Too much responsibility at too early an age, no support.  A brief life of malnutrition and illness - gone too soon.
The phone rang again - Djohn in Sen Rafayel.  Thieves broke into our little office and stole all the furniture.  Students were lined up - what should he do?   I told him to tell everyone the office is closed due to a death, lock the door, then find Kesner and be with him.  We will make an unplanned trip up the mountain after I have been to the bank Monday. 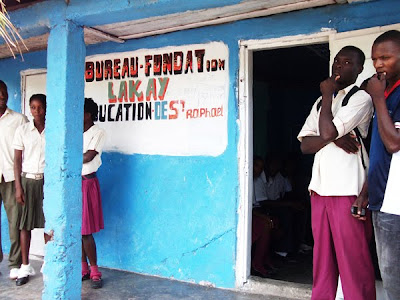 Auguste called to set a time for the graduation tomorrow.  Sister Rosemary called to cancel our birthday lunch as she is not well.  Jack arrived on a motoscooter with packages filled with the electrician's wish list.  Both will arrive tomorrow at 9 a.m. (after church at 6) and rewire the house, making it safer and more efficient.

Amid the phone calls and conversations, pre-planning a trip to Sen Rafayel, I cannot get 18 year old Chemen Cadeau out of my mind.  I don't beat myself up - I know we do as much as we can.  And we're not here to fix or save or rescue, rather work together in supportive, nurturing relationships, respecting individuals' need for dignity and control in their lives.

But an 18 year old girl should not be dead from a cold.  Chemen died of "opresyon" [shortness of breath, asthma, hyperventilation...]. We have had a great deal of rain, and most of our young people in Sen Rafayel sleep on the ground. Kesner told me she developed a cold with a cough on Thursday and died this morning, because she couldn't breath.

Jon Kabat-Zinn, in his book 'Wherever You Go There You Are' writes of generosity ... "practice sharing the fullness of your being ... above all your presence.  Share it ... with the world." (pg. 62)  "Initiate giving.  Don't wait for someone to ask.  You may find that, rather than exhausting your resources, you will replenish them ... At the deepest level there is no giver, no gift, no recipient ... only the universe rearranging itself." (pg. 64)

If everyone who reads this would rearrange the universe in whatever way their financial situation allows, some good would come from Chemen's death.

Kesner would be very grateful to anyone who could help him pay for the funeral.  His brothers, Jocelin (18 years of age - twin of Chemen) and Jodelin (13 years old) are both ill.
Posted by Starthower Founder at 9:55 PM 1 comment: