Hi Everyone!
Finally, I am able to type again! Hard enough to explain in English what's been happening.

Just imagine how much harder to explain in Kreyol, to Auguste, our Director of Education in Haiti.

If anyone has been waiting for an email from me, here's what's been going on the past two weeks.

After being diagnosed a few weeks ago with multiple infections in the surgical wound, I spent the last two weeks quite incapacitated; first with an IV line in each hand, then with an improperly installed PICC line (see Wiki def.) in the bend of my right arm. The pain from the PICC was as miserable as the side effects of the IV meds!

Simple hygiene routines that you usually take for granted became chores: Flossing teeth is impossible, brushing slightly less so. As for washing your hair, well, forget that! Especially since my left wrist, broken and improperly set in Cap-Haitien a few years ago, wasn't exactly up to the job of taking over all chores.

On Friday, the PICC was finally removed, with much difficulty. (OUCH!) Thank goodness my amazing nurses Leslie and Jenna came as a team for the job. They are truly amazing. Thanks also Pam, Peter and Elise who did night duty with the IV bags. When this is all said and done, I will have so many new life experiences from which to draw nuggets of wisdom!

Speaking of new experiences, we have a list of young people who would dearly love to continue their education after struggling through seven years of high school. I have had a lot of time to reflect on the changing mandate of Starthrower Foundation. Originally, we hoped to help these Haitian youth graduate high school. But now, as they graduate, I can see that some of these young people still need help and support to get beyond secondary education.

Educated citizenry is vital to the growth of Haiti. So although sponsoring youth in post-secondary studies is new territory for us, we are all up to the challenge. Even something as simple as their moving from small villages to large cities is daunting, but I am confident our young people can handle this and other challenges. Our current university students had wanted to go to summer school but we had no funds left in the budget. They will start again in August.

Here are two young men who we feel can use this ongoing support. As post secondary is expensive ($4500 USD-$5000 USD/year, which includes room and board and travel twice a year to home base), we don't expect each student will have a single sponsor.

Perhaps a group of people, a community, a club or association can work together to sponsor them. Just let us know where you would like the support directed. We don't expect sponsors to commit beyond a year. No one understands better than I how quickly life circumstances can change. 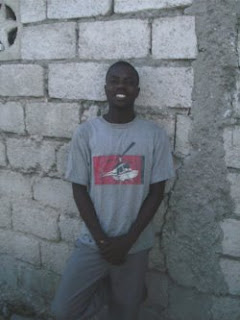 His dad had died just 2 days before he got his final results last year. He has one brother and one sister living, and neither has ever gone to school.

Plenito wants to study genie electronique (master electrician), which is a 5 year program offered at both state and private universities located in Port-au-Prince. He didn't go to school last year because we were unable to raise enough money to support him.

Vincent Robert (22/03/84) is entering his third year of a 5 year program, studying agronomie (Agriculture). Vincent's sponsor was unable to continue after the first year and although we have supported him through the last year, we don't have enough in the budget to cover his continuing in the program.

Thanks to all of you with the creativity and skills to use other media and means (YouTube - Michael, Webcomic-Daniel, eBay- Maureen) to support Starthrower Foundation. If I've overlooked anyone, I apologize, and please remind me!

Sister Rosemary emailed me yesterday when she was at Lakay Fondasyon, our house in Haiti. She said that the internet and the phones at the convent are still not working, but that our 'little cyber cafe' at Lakay Fondasyon is chugging along.

She said that she had read the email that I had sent to Auguste, so she now knows why I have not been in touch. She also wrote that as well as the two students already mentioned above, three more -- Peterson, Alland and Wisly -- have all requested sponsors for post secondary. I will get details from Auguste and let you know. All we can do is ask on their behalf, but at least this is better than not trying at all.

Thank you for staying with us through this unpredictable time, and thank you for taking these young people into your hearts, and for your ongoing support.

I am missing being in Haiti very much, and I feel the need to go to Cap-Haitein for my mental/spiritual well being, so I am working hard to get fit for travel. I hope to go this summer, even if it's only a short visit just to see how everyone is doing, and to see Mme Cindy when she comes to visit and to reassure to the staff and students that I am indeed coming back at some point.

The picture at the top of the page is of Rosenie, Alex (intern) and me at Lakay Fondasyon last August.

Hi Sharon, happy to see you are doing better and I do hope you get to go back to Haiti this summer.
Regarding University costs, do you need that amount up-front or can it be divided monthly?
Pran swen
Daniel

Re: University costs - they can be divided monthly. Although fees are front loaded at the beginning of each semester, it is actually a big help to know that x amount is coming in on a monthly basis.

When is the next semester starting?
Oh and BON ANIVÈSÈ!!

Baring the unforseen (like several Tropical storms/hurricanes passing through in September)next semester for University at Limbe should start in Sept. with inkripsyon taking place in August. This was the same in Potoprens last year but cannot speak with any authority for this year.

All high schools should begin by the end of September, again baring natural disasters..