I am on my way to Cap-Haitien Haiti so by the time you receive this I may already be at Lakay. Here's an earthquake aftermath update about Cap-Haitien schools opening, students, hydro and water, food, study and job programs.

As well, here are a few pictures sent from Haiti before the quake. (Click on the picture to see a larger version, then click the Back button to return to this page.) 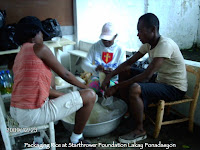 Hydro, Schools, Programs
One area of Cap-Haitien had a little hydro on Wednesday but not in our section. More kids are coming every day looking for news about what's happening, and for food and water as schools remain closed.

We plan to start meal hand outs, and food and study programs and job creation on Monday (February 1). I'll give you more information once I have a chance to assess the situation in Haiti, but if schools are not able to open, then one of the programs we will set up will be for studying and tutoring. We can have the students come to the Lakay to do their school work.

Restarting school, university, etc will be a massive undertaking in much of Haiti. See this report on CBC news  for a bit of background.

Guilene, Port-au-Prince
Just before I left Toronto (Saturday,January 30), I received an email from Auguste, our director of education in Haiti. Auguste said that Guilene (see this post) made it safely from Port-au-Prince to San Rafayel. She took the alternate route which by passes Cap-Haitien.

Nursing Students Leogane
Bruni, Gaby, Wesley and Alland, the 4 nursing students at the (now demolished) nursing school also made their way to Sen Rafayel.  I expect that Bruni will help them find temporary accommodation. They are expected to come down the mountain to see us in Cap-Haitien this week. I will let you know when I hear from them.

Plenitude, Peterson, Port-au-Prince
Plenitude remains unaccounted for after his initial phone call (this post). Peterson made it to Cap-Haitien to go to a clinic to get patched up. He has now returned to Port-au-Prince in the hopes of going through the rubble of his dormitory to find his papers (pyes yo) -- his birth certificate, baptismal certificate, high school papers and university entrance papers.

Alternatives to Haiti Schools
I've had several inquires about the feasibility of sending our Haitian post-secondary students to North America or to the Dominican Republic to continue their studies at this time. Other than the cost involved, there is also the language barrier. Our students speak Kreyol (Creole). Some may know a smattering of French and / or English, but not at a level acceptable for post-secondary studies.

Haiti Trips Postponed, Canceled
Visitors who had planned to travel to meet me in Cap-Haitien in the coming weeks have canceled or postponed travel at this time.

Donations, Fundraisers, Christmas Boxes
Thank you for supporting the earthquake relief fund, nutrition and education programs, and for organizing fundraisers. As always, the easiest thing to get to Haiti is cash.

Thank you for offering to send clothing, bedding, etc. but those items are available in Haiti, and so do not require costly shipping. When we buy these items in Haiti, we make best use of your donations.

Thanks again to Mochaberry Cafe, Henning's Salon and Acheson's in Orangeville, ON  for collecting money for Starthrower following the earthquake.

Auguste reports that more of the Christmas boxes are arriving in Cap-Haitien. And just prior to the earthquake, he was advised that a shipment of supplies sent months ago from Mlle Kayla in the U.S. had arrived, but I do not know if he was able to arrange to pick it up at the port:  "CasXpress gen bwat-la pou nou men yo pa livre li paske moun ki pou bay nou bwat la, li pa Okap bwat Mlle Kayla." I'll check into that as soon as I can.

Next Update From Haiti:
If all goes according to plan today (Sunday), I will be in Cap-Haitien by late afternoon. I hope to be able to assess what's happened at our center (water, hydro, damage to buildings, etc) and the likelihood of schools opening in Cap-Haitien, as well as updates on our students, and let you know by the middle of next week.

Travel To Haiti
As I make my way via Ft Lauderdale to Haiti this weekend, I have been pleasantly surprised at the response from everyone who asked where I was going.

In the past (before the earthquake), when I said, "Haiti," there were grimaces made, and some airline staff, customs agents and fellow passengers wondered why I would ever want to go there.

This trip have found a shift in thinking. Twice folks said, "Those poor people! Haven't they had enough?' Empathy: What a healing, life-giving emotion.

Sharon
Posted by Starthower Founder at 9:28 AM

You have done amazing things in Haiti, Sharon and we know you will again. Our thoughts and prayers are with you.

As you wing your way back to Haiti, I sit here having my morning coffee in a beautiful house in a comfortable well-off suburb in Melbourne, surrounded by the sounds of people heading off to their secure jobs and going about daily life ... and it's hard to imagine what the people of Haiti are going through.

In the aftermath of the terrible disaster in which so many souls died, I see you as a shining light, a beacon of all that's good in the world, as you journey back to where your heart was left with the kids at your house.

You are doing the thing which many of us WISH we had the courage to do, but we wouldn't know how to start, what to do, how to help etc.

What we can do is send lots of love and prayers, and hope that our small donations add up to help as many people as possible - not just in this aftermath, but also going forward to continue to allow YOU to do this amazing job you've chosen for yourself.

You're an amazing woman - and we all appreciate your efforts, especially now as you are recoving from major surgeries.

Your first thought is always for your 'family' in Haiti and how you can help them - I wish you godspeed, and may your presence help ease some of the fear and anxiety of those you are going to see.

Big heart-felt hugs across the miles, with much love,
Teena Hughes in Australia
http://A-Night-in-Paris.com