This week began innocently enough. I was allowed to turn the water back on Sunday night at 6 p.m., the plumbing operations, performed Saturday were sufficiently dry and I was exhausted so bed at 6:30.

When one is up with the roosters at 4 a.m., fatigue sets in early. Besides we had endured a weekend of torrential rains and that lulls me.

Another Quake Felt in Cap-Haitien 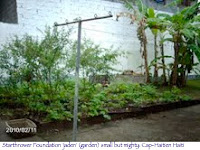 At 7:49 p.m. (according to my cell phone), an aftershock tossed my bed from side to side. It certainly took my attention off the book I was reading.

The options were to stay in bed and wait for another shock, or join the rest leaving their houses and heading for the street in the pouring rain. I chose option A.

Monday morning rain continued unabated.  I rose and opened the house, fed the animals, fed night security, boiled water for dishes (we cook with propane, so must go outside in the rain). Auguste was back from his week off, and his shoulders had descended from his ears and were sitting in the appropriate place. As well he was smiling despite the rain.

Tuesday was the first of three days March for the Official Mourning Period. It began at 6 a.m. and wove through town from the airport, closing businesses, hospitals and clinics, and stoppin traffic until 6 p.m., so all staff walked to and from our center.

Jack, Dieugrand, Christamene, Jean Ricot arrived and decided to work inside as the rain was so heavy. Jack had repaired the quake damage in one room and it needed to be painted. Perfect indoor work. Outdoor repairs are impossible with all the rain.

Joceline arrived and began to clean bathrooms, Carmene arrived from the market an hour later. Thank goodness she took a cab. Students were arriving, Claudy was on the phone from Sen Rafayel, but I had to go to town to the bank to pick up the Moneygram sent from PA to help Carmene manage her houseful.

Jackson (cab) arrived within 20 minutes and off we went. When the rains come, huge amounts of water are dumped. Although he parked on the sidewalk in front of Fonkoze (bank), the water still came up over my shoes. 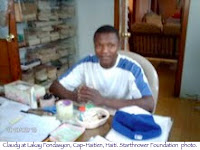 Inside I knew what a sardine must experience wedged in a tin. The place was full of folks waiting for Moneygrams. The guard said I would probably get processed about 3 p.m.

This was 10:30. There were 8 chairs, and more than 40 people. I would have stayed except for the fact that one must surrender either passport or Haitian identity card.

I'm uneasy when my passport is somewhere I can't see and dozens are milling around in front of me. So I secured my passport and asked for the daily rate of exchange. Armed with that information we went looking for ice for the house. None to be found and the road was so bad we past several taxis which had lost tires in the potholes.

Home at last and Martha is waiting, so sick from not eating or sleeping. But she can't eat/sleep because she keeps feeling the  ground move. So after she drank a little tea, ate a little bread and cream cheese and half a gravol tablet, she began to settle.

Schools Cap-Haitien Collapse
Jackson had just arrived in town spurred on by a call from his brother: Le Petit Ecole, a private primary school in Carrenage (downtown Cap-Haitien) had collapsed and he was going to help. We learned that 4 Grade 4 students were killed, up to 8 more students plus a teacher were seriously injured.

We later learned that one of the little boys who died was the only son of M. Brutus, our rental agent. I have spoken to that boy so many times on the phone from the time he was learning to talk.  Our condolences to the family.

Also killed was the only son of Dr. Toussaint, a local pediatrician. Mudslide and huge boulders had crashed down the mountain, landing on the roof of the school.

This is a yearly occurrence during the rainy season. In the last 2 days, 3 more schools in Cap-Haitien have had walls. etc. collapse. 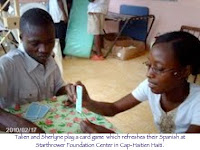 Thankfully no one was injured, as these schools had closed after the disaster at Le Petit Ecole.

Lakay Fondasyon Damage, Injuries
Wednesday night the rain continued unabated and what was left of our damaged covered parking / study space came down. Jack had arrived early to help me as I had had no security overnight, and after filling water pails for me to boil, he poured a cup of coffee.

He never got to drink it, though, as a very large mouse poked its head out from between the tins of dry goods. Into action we went, dispatching the mouse and deciding to rearrange to pantry area completely. The mouse had been very industrious and it needed a good cleaning.

Jack, who had been injured when working on repairing the covered study area, is going for an x-ray on his knee. Though the wounds on his forehead and leg from the wood falling on him have healed, the one on his arm is still quite nasty. I am changing the dressing every 2 days,. He also has pain in the knee area where he was frappe.

Carmene phoned during to say that she had a very high fever and could not work. I couldn't urge her to get tested for Malaria as hospital (and many business) were still closed for National Mourning.

Auguste has started to talk about his fears for the country and trying to deal with kids who have the same fears but he feels he mustn't show his.

Sen Rafayel Medical Dental, Guilene, Gaby
The students in Sen Rafayel have phoned us, but not come down into Cap-Haitien because of rain, mud, rocks blocking route. But Friday, Claudy made it down from Sen Rafayel with requests for money from hospitals, dentists, clinics.

I never begrudge payment for dental work, but the charge for dental hygiene products which in Canada would be a gift from the dentist gets my Irish up. Besides we provide these supplies to the students at the beginning of every trimest (except for the floss, as we can't get it). So we learned today that we specify we pay for treatment only.

Christamene and Jean Ricot both have dental problems so we are sending them to the dental clinic at Sacre Coeur Hospital in Milot although we know they are overrun with victims of the earthquake.

We sent Guilene to the hospital in Pignon as she is having pain in her shoulders and back. Small wonder after being trapped under the rubble in Port-au-Prince for 6 days.  We sent her to Lopital Bienfaisance in Pignon; she needs 2 x-rays for a total of $700 Haitian ($93 US), payable up front.

Since she couldn't pay, they sent her back down the mountain by camionet over terrible roads with who knows what pain (and she is blind) to get the money before they would take the x rays.

Truth or Rumour? Study Abroad Program
Gaby (student nurse) sent a letter from Sen Rafayel via Claudy today. He has again heard on Haitian radio (each station has a different version) that other countries are offering to help those students who were post secondary in the Port-au-Prince area  continue their studies abroad.

I have heard nothing about this. If anyone has any info, please let me know.

Gaby also said in his letter that after 2 weeks in Sen-Rafayel, "I think I can take back me."  How profoundly moving and descriptive. Bear in mind, English is about his 4th language.

Schools Opening After Easter?
A local magistrate said on the radio that schools should remain closed at least until Easter (April 5-6), which would mean a one-semester year rather than trimest. At this time, I don't know if our payment would be honoured.

Rosenie
At the beginning of every trimeste, we distribute toothbrushes, toothpaste, bar soap, facecloths etc. and the girls drop in whenever they need pads. Part of Rosenie's job is to purchase and prepare hygiene products for distribution. She purchased everything on  February 7.

She was off on Friday when Claudy had come down from Sen Rafayel and when we had sent everything that she had purchased back with him (prices are higher in the Sen Rafayel market).

Imagine her surprise when she arrived for work and found she had nothing to work with. At least she knew where to go to find supplies and I knew exactly what things would cost.  So she is preparing hygiene packages for distribution and tomorrow, we package rice, beans and oil to distribute. See food program details here.

Water and Christmas Boxes Arrive
Today (Saturday), Jack called to say the store owner with whom he left our deposit bottles just called him to let us know the potable water had finally arrived, so he is coming to pick up and deliver.

Mme A. just phoned to say that she has 4 boxes for us, the rest of the Christmas boxes from PA. So BIG thank you to Mme Cindy and her elves. Now we hunt down Jackson, our driver, to pick them up.

Donations and Fundraisers
Sunday (tomorrow), we will to go to the airport to pick up the bags that Daniel in Toronto is sending by air from Providenciales, Turks and Caicos.

Thank you all for continuing to support Starthrower Foundation, the students and their families in Haiti, by donating funds,  by donating and offering goods and services from dental and carpenter supplies to trauma counselling and paramedic skills, by holding fundraiser events and in schools. 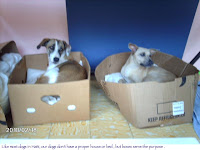 Ti Sab (dog, member of security team) still not well but able to stand up albeit very wobbly, still falls down a lot, moves laterally, has developed a large lump on lt. haunch (picture this post).
.
Posted by Starthower Founder at 9:09 PM

Healing Out of Hoarding said...

I am so sorry to hear that more children died in the school's collapse. It is terrible to lose a child to death.
And there has been all too much of that, this year.

I do not know about study abroad programs yet, but I have e-mailed our local Virginia College of Osteopathic Medicine to ask if they may offer such an option. They do outreach programs, and one of their centers is in the Dominican Republic. I will let you know what I can find out.

What a blessing that the Christmas boxes are arriving - I'm sure you can use everything especially much, right now.

You all remain in my prayers, including Ti Sab.

Bless you very much, one and all, Peg