An eventful few weeks in Cap-Haitien, Haiti!
First, the good news:  Edwinna has a sponsor to see her through high school. Thank you, Tracey and family in Canada, and welcome to the Starthrower community! 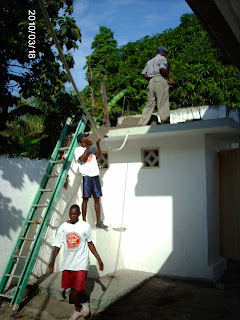 We're still making repairs to our place and to our own students' housing.

Those repairs are almost finished, for though the damage was extensive, their homes are much smaller and have toll and wood roofs, not cement.

However, we have just heard from the Bos Mason, M. Franck, (father of Frandzy, husband of Mme. Carmene) that the structure of our center in Cap-Haitien has been compromised by each successive after shock, so now our energies are being diverted from the ti kay repairs and focussed on home.

I asked M. Franck if he required another Mason to split the work, so after M. Brutus (owner`s rep) has been. we will need to hire more students to assist as well.

And, as the mason was breaking down the cracks on the outside wall, I just happened to be in the bathroom; the crack went clear through to the inside and cracked the ceramic wall tiles in the shower enclosure. Also, the cracks on the outside of the master bedroom (where Mme Marjorie slept last weekend) went through to the inside as well, destroying the repairs we had made to that room.

Same in the  kitchen, so we will have to tear down the ceramic tiles Jack installed behind the stove and refinish after repairs. This could easily take a year and it's someone else's house. So much work for someone else.

We are schedued to close Friday (Vendredisen, Good Friday), however that may change due to the urgent nature of the repairs. The work will be done with the mason standing on a ladder being held in place be 2 students, and using a hammer and nail to break up the house a section at a time. We are going to purchase the supplies to build a chafo-a (scaffold) of bamboo and planks. Unfortunately there is no rental service here.

Vehicle Purchase Update
What we thought was good news about buying a vehicle turned out not to be. We'd put in an offer for a truck, but the owner decided to hold out for more money, so did not accept it. Something will come along. I am certain if we do not use what is left of Mme Ann's donation, another emergency will come along and the entire gift will have disappeared with no vehicle to show for it. 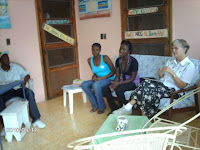 Photo: Rosenie and Nadege and Sister Rosemary at Lakay Fondasyon in Cap-Haitien
The March 13, 14 weekend was very busy with visitors and events.

Rosenie and Nadege, who had travelled to France with Sewoz (Sister Rosemary), are embarking on a project together with Erin, a university staff member in the U.S. who also attended the France conference.

They are working to help displaced  secondary and university students from Port-au-Prince (Potoprens-la).

On Saturday, we purchased supplies for distribution; On Sunday morning, we prepared sacks of food, then cleaned and set up the gallery to receive 8 of the 12 young Port-au-Prince students invited. Their stories of January 12 (quake day) were difficult to listen to. How they stay sane is  perhaps a tribute to the resilience of youth.

We have people from Port-au-Prince knocking on our portay (gate) every day asking for support. All we can do is direct them to the gymnasium for registration. This student response is something manageable. We have added all of them to our food distribution and potable water programs as well providing clothing and shoes. Doesn't heal the spirit but perhaps makes the challenges more palatable.

Mme Marjorie was here for the weekend and left on Monday. Sister Rosemary left Wednesday. The combination of rain, rain and sun is helping our garden. We had electricity most of the weekend for Mme Marjorie's visit. Yes, it went off about a dozen times BUT it came back, then left about the same time she did for the airport.

Sad News
The week ended on a sad note. Weby-Schneider's dad, M. Fan-fan, died. He was a lovely, gracious human being who suffered terribly with uncontrollable diabetes.  It is but one of the scourges of this country. When we visited his home in September, 2008 (shortly before my emergency surgery), he welcomed us, and sat and talked although obviously in a great deal of pain from multiple surgeries resulting from the diabetes. 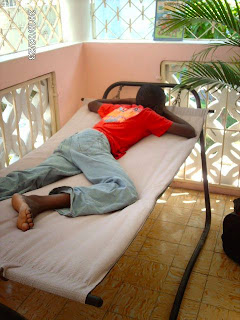 Photo: Students Contracting Malaria in Cap-Haitien, Sen Rafayel Haiti
Claudy came down from Sen-Rafayel Tuesday. The route was almost impassable due to mud and rocks from recent rains.

The machine broke down twice and he finally walked the last half arriving here at 4 p.m.

He was shaking from fatigue and fever (malaria). We fed him, and I suggested he stay here at the center, then go to the clinic in the morning.

He has an aunt living in Petit-Anse. This would allow time for Auguste (director of education) to get to the bank to pick up funds for Sen Rafayel school fees and to restart the food distribution program there. 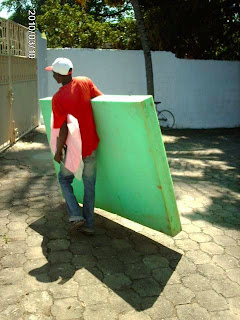 Student Heads For Home with Sleeping Mat, Mosquito Net
We sent Claudy off with new clothes, shoes and a sack of food for his tant.  He did stay over, and the clinic the next day confirmed malaria.

Modeline was our 4th malaria case and Claudy our 5th.

It is such a devastating illness and these young people keep going not in spite of but in tandem with the pain and fever.

Our sick numbers are growing: Lusnot has a boul (growth, abscess) on his neck. We are treating it with topical and oral antibiotics, as prescribed.

The hospital, however, says antibiotics won't help, as the abscess is on a vein. Othanes is also very ill with similar symptoms to Edwinna and Sister Rosemary. Nothing specific showing up in blood work. No surprise.

I also sent Auguste to the clinic for tests as he had Typhoid symptoms. The clinic confirmed he has malaria (our 6th case), typhoid and UTI,  so he will be lost to us for at least a few days. 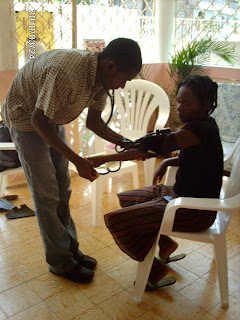 Photo: Student Nurse Gaby Checks Carmene's Blood Pressure
Gaby came in from Leogane yesterday to update us on the work at the field hospital and tell us the potential start date for Leogane nursing school.

At my request, he held a blood pressure clinic for staff, looking every inch the seasoned professional.

He has been allowed to observe surgeries and his eyes just sparkle as he describes procedures.

I know he would make a great nurse, but I believe nursing will lose him to surgery.

Cat and Dog
On the up side, Ti Sab, our smallest dog, with cerebral palsy (maladi latranblad, according to our resident nurse, Sewoz) has recovered from pneumonia, thanks to Allimax, but now, we are out of it.

Lucy, our wonderful mother cat is plen (with kitten) although the 'vet' told us he had neutered her. Oops. Good thing we really like kittens! Thanks to Mme Cindy in Pennsylvania, we will be able to feed them.

I have changed my return flight to Canada from March 31 to May 8. Initially the change was made as the school system is in disarray. We have yet to hear from the Minister of Education. Several schools opened 2 weeks ago and are charging full fees for the Jan-Easter trimest although schools have been closed since January 12. I will pay half as I know they have commitments but I draw the line at paying the teachers which will deprive our young people.

Pase yon bon semen sa-a (have a great week)
Joyeuse Pak (Happy Easter, for those who celebrate it)

Sharon
PS
Last Friday, a tanker coming in to Cap-Haitien harbor hit the dock. The resulting shudder resonated throughout the district. The students in a nearby school thought it was a tsunami and despite the teachers' urgings to remain calm, many jumped over the second story balcony and broke legs, feet and arms. Hopefully the level of orthopedic care here has improved dramatically. This shows the level of fear and how pervasive it is.

Joceline came in this morning with a story of two toddlers who yesterday fell into the latrine behind the church she attends on Sundays. Both died.

This poor country! One cannot help but ache for it.
Posted by Starthower Founder at 4:36 PM