I often find myself unobtrusively observing the work ethic of those we serve.  My presence is most times unnecessary. 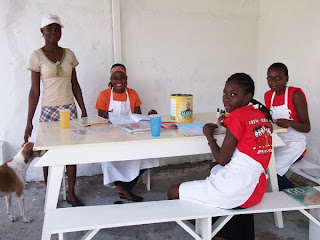 Our book refurbishing program is in full swing - text books piled everwhere - with some still to come in as we had several students writing state exams this week.  Funds are limited this year so student staffers are working alternate days.  Rather that than no work.  We therefore have 2 teams named... what else...  Argentina and Brazil.
(Photo- A team)
We took a day off to attend Paulaine's graduation.  What a talented young woman!  I'm almost tempted to set up a small shop and sell her work to visitors.  Almost. 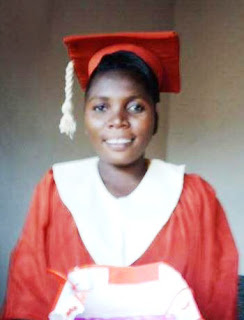 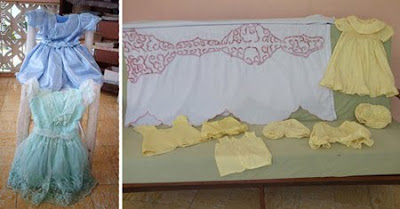 While work continues at the centre, we've been making weekly trips to Sen Rafayel to facilitate changing staff members and location.  Last week our truck broke down on the side of the mountain, between Dondon and Sen Rafayel.  Not a great place to be stranded.  Everyone within walking distance came to observe and offer suggestions.  I perched on top of the load on the back of the truck talking to those who dropped by. 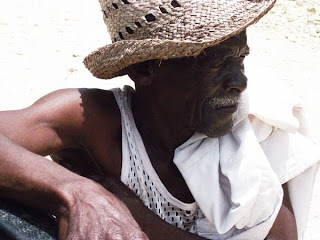 The faces of Haiti never cease to intrigue me - every one a story to be told:  a gentleman who thought perhaps he was 45 years old when I asked him; children fascinated by a blan speaking Kreyol; coconut trees so tall one could never harvest the fruit.
Thank goodness for cell phones and students.  We called ahead to Sen Rafayel and within the hour Djohn arrived on a motorscooter with Danius, one of our university students.  After naming the problem - electrical system shut down, alternator gone and battery now dead, they headed back to Sen Rafayel.  Two hours later and one borrowed battery, we were on our way.
To everyone's surprise, the owner of our new location, true to his word, has replaced the rotten pieces of roofing (tol) and has emptied the 2 rooms.  Now we can see what has to be done and we have made a list of materials for the next visit.  As Jack and Jackson head to the mechanic's to charge our battery and pay the bill, Auguste and I head to the "old office" to look at medical referrals and book lists with Djohn and Kesner, then on to pay home visits to Kesner's home and to Wilsaint's. 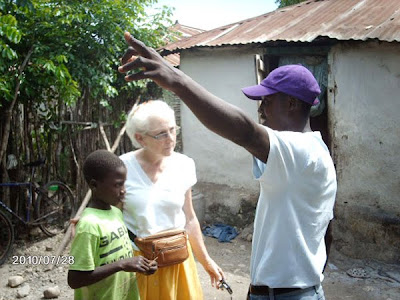 (Kesner and younger brother Jocelin share pain of sister's death - see previous blog post)
During the brief time we were in the office, 35 new students dropped in with letters requesting school support.  Djohn has dozens more in a notebook.  It is a flood of young people.  One could spend a lifetime in that one location.  What a difference it would make.  We'll do what we can.
Wilsaint is in need of hernia surgery and extensive dental work.  In addition, the "ti kay" in which he lives with his mother and sisters suffered extensive damage in the January 12th quake.  The back wall is gone.  The owner will not help with repairs.  Wilsaint tells us his mother owns a little piece of land which she worked as a garden when well enough.  We will check the ownership status, and if the papers are good, will put out a request for funds to help them build a small house on the site.  Imagine - home ownership!  Of course - no running water, no electricity, no plumbing.  But we could possibly dig a latrine. 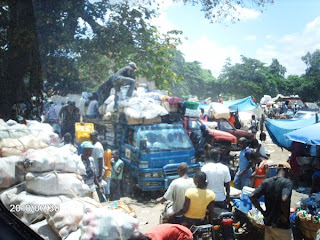 Thursday (July 29th) was a blur making necessary vehicle repairs, then Friday bright and early, Auguste and I headed to the bus station on the next great adventure - a home/school visit to our pre-med students, Elorge and Marlene in Santiago, Dominican Republic.
The 4 hour trip took 9 hours as Friday is market day in Ouanaminthe.  For 5 hours we inched through the chaos and human drama.  Then we were in Santiago.  The shock of new experiences on the trip to Leogane, including Auguste flying for the first time, paled in comparison to the comparative wealth of the Dominican Republic.  Auguste was non verbal for a long time and when I asked how he was feeling, he shook his head and said very quietly "Se yon lot monn" (It's another world).  Marlene and Elorge had been waiting at the bus stop since 11 a.m. - it was now 4:15 p.m..  The hotel was another shock for Auguste - a bed of his own, a private toilet, a shower AND a television set not to mention air conditioning.  Although just a small hotel across from the university, it was another concept for Auguste to wrestle with - people actually have the means (moyen ekonomik) to stay in places like this.
After checking in and stowing bags, we headed downstairs to the restaurant, time to catch up.  Our young people had never expressed angst at being so far from home nor the challenge of studying and living in a different language and culture.  But it came pouring out over salad and a sandwich.  I was so glad we had made the effort.  They were amazing - speaking Spanish as though born to it.
Saturday (July 31st) morning included breakfast together then a tour of the campus.  They were so proud and knowledgable.  We saw everything from the first Spanish classroom to the student centre, cafeteria, coveted Department of Medicine and Convocation Hall.  We laughed a lot, asked a million questions, and then went on to their student apartment. 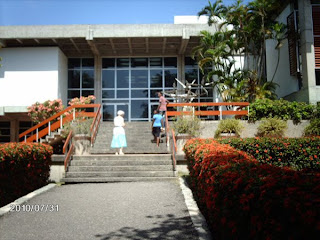 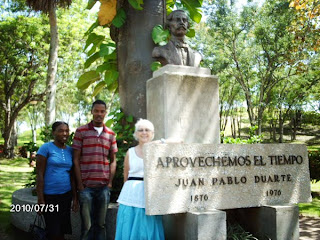 (Marlen, Elorge and Sharon on Campus and at the library)
We had a chance to sit down and reflect on the amazing journeys we were each on - and how they had come together in this place.  I know I say it in private emails, but I'm saying it here as well - Marjorie and Jeffrey - you are amazing human beings. Through your sponsorship, and I know you sacrifice to do it, you have already completely changed the lives of these young people and everyone who knows them.  This is the essence of Starthrower - making a difference one life at a time.  May you be blessed. 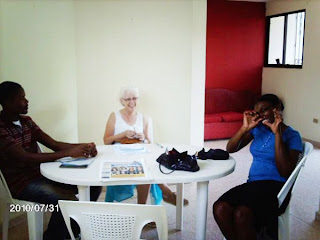 ( Elorge and Marlene's apartment in Sentiago)
We have so many young people who would benefit from individual sponsorship (or a group of sponsors).  Their lives are enhanced when they know that someone cares.  Deles and Edwina (our only two other sponsored kids) are different people because they know someone cares.  Think about it. 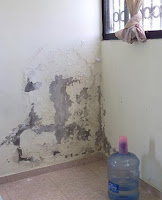 Afternoon saw us heading downtown, list in hand to price some needed items - a small fridge (I cringed at an open jar of mayonnaise on a shelf for weeks), a desk for Marlene's room, scrapers to have a go at the mold and water damage on several walls (the worst in Marlene's bedroom - photo), paint, a shower curtain, backpacks...  Now we know what can be purchased and where.  Some prices surprised us, others did not.  Using the peso was much the same as the gourde, without the added frustration of a dollar concept thrown in to the mix.  I can almost hear our bookeeper Ingrid sigh when I write of dealing with yet another currency.
Sunday we travelled back with Marlene, heading home after exams for a 2 week vacation.  Elorge followed on Tuesday.  They know better than to travel on market days.  A tip of the hat to Carib Tours - a reasonably priced, comfortable way to travel.
Monday (Aug. 2nd) began bright and early with drop ins and medical referrals, food before writing an exam, potable water.  Modeline took a break about 10:30 and wanted to kick the soccer ball around, only to discover that all of the soccer balls had gone missing.  Someone needed them more.  So we kicked around a smaller ball which fit very nicely down the drainage channel.  Most of my time was spent retrieving.  We'll look for new soccer balls this week.  Thursday the staff headed with a very loaded vehicle to Sen Rafayel to put up walls of cilotex, scrub and clean, order new doors, purchase safety locks.  I had decided to send Rosenie in my place - good thing!  They were gone from 7 a.m. until 7 p.m.  Next day a visit from the owner, here from Miami.  He came for a family funeral but wanted to see the repairs needed first hand.
Monday (Aug. 9th), we will be heading to Labadee to pick up supplies, Wednesday to Sen Rafayel to meet with current students and put a coat of paint on the office, also to "randevu" with those hopefuls, asking them to come month end with birth certificates, as well as last report cards and last payment record (kane de payman).
Meanwhile, it's Saturday (Aug. 7th).  Stephen is cleaning the garden, Joceline cleaning out the dispensary cupboard and Jack and Dieugrand are washing the truck.  They don't work today - they just wanted to wash the truck.  Joceline is ready to organize the cupboard so we'll talk later.
Beni-w
Sharon
Posted by Starthower Founder at 6:16 PM