.
Haiti Exam Results are now posted for the country as a whole, and overall, Starthrower's high school students are more than holding their own, they are doing better than the national average!

This is especially gratifying for us at Starthrower, since these Haiti - wide results include all socio-economic levels, while Starthrower sponsored students are almost exclusively drawn from the poorest of the poor. Yet, once again, these hardworking and motivated young people have demonstrated that given proper support, they can not only compete with Haiti as a whole, they can and do excel!

I am not sure of whom I am prouder: Our students for their hard work, our staff who tutor them, or our sponsors who enable them to go to school! A pat on the back and big hugs to all of you!

Starthrower students' 2009 average is currently at 40 percent but hopefully that will improve after the rewrites.

[For those wanting more information, go to Haiti MENFP. Unfortunately, we don't know the breakdown for Haiti north, as the site only gives a breakdown for 3 of the 6 departments in the country.]

Last year, 2008, we had 100 percent pass at the Philo level.(see post July 2008) This year, Deles was unable to tutor students in Sen Rafayel due to his own school schedule, and his absence was keenly felt. Both he and Auguste are natural born teachers, and their tutoring and mentoring is a large factor in the students' success.

The 2008 Haiti country average was 62.19 percent. Quite a drop in 2009, notes Charles, who follows the results from Switzerland, considering the general calm this year in Haiti. But remember, too, that the 2008-9 school year began a month later than usual due to the series of tropical storms and hurricanes that hit in September.

There were no failures at this level. Those who are ajournee (adjourned) will rewrite exams from August 24-27. 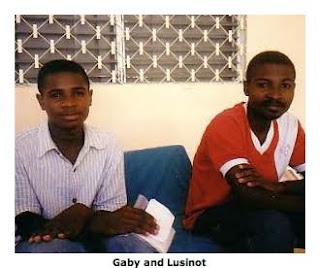 Congratulations to Gaby D. (Philo) and Rose-Guerlande B. (Rheto) who were bon (passed).

(Anna and Cindy from Penn. were able to meet and talk to Gaby, as he happened to be doing a bit of maintenance on the house.)

Gaby has worked very hard since he came to us 5 years ago. He has had malaria at least once every year, as well as other infections. The little kay (house) in which he and his brother, Lusnot, live has been flooded every year. And so every year, the boys have to find temporary shelter while cleaning up.

Now that he has graduated, Gaby wants to continue on to become a nurse, or a medical technologist. I have asked him to decide before we ask for a sponsor. Luckily, either course of study is less expensive than university tuition, and either one will lead to a good job when completed.

Alland and Wisly dropped by the other day. They originally wanted to be doctors but when they didn't get in to State University, and also decided the cost was too prohibitive for sponsorship, they settled on Agriculture at the University at Limbe, which costs between $4500 and $5000 per year.

Now they have been talking and thinking that they would like to apply to the new School of Nursing program at Leogane (they probably talked to Gaby!) which costs about $3,000 per year, and includes room and board. With their original interest in medicine, and with nursing school costs much lower than medical school, a much lower amount of sponsorship money is needed. Conversely, donations go further when programs cost less, and so will benefit a greater number of students.

Inskripsyon Registering for Fall Term
Auguste, Starthrower's director of education, is starting to visit area schools to pay for inskripsyon in order to hold places for our sponsored students. And we still need backpacks for September, though not as many as we did last week, thanks to Daniel in Toronto. He is trying out a new shipping route to send some of the needed backpacks and pencil cases, and will let us know how successful it is! 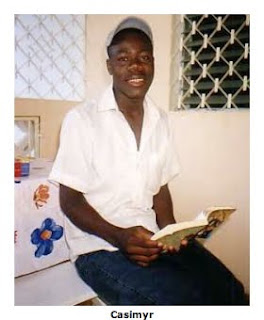 As well as students listed above,sponsors are needed for Casimyr and Osman, Teacher's College (5 year Co-op), about $3000/year.

That will include a small allowance for room and board as well as travel twice a year home to Sen Rafayel.

If Micheline (see photo here) passes her Philo, she will return for the second year of the medical technologist program. Cost is about $1500/per year which includes a daily travel allowance as well as a stipend for room and board. 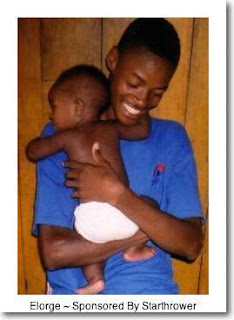 Elorge and Marlene, our current students in pre med in Santiago, Dominican Republic, need $5,000-$7,000 per year. This includes apartment, food, travel to Haiti twice a year.

We subsidize the sponsor money as there are always costs popping up throughout the school year which we cannot anticipate.

Johnley wishes to attend the Ecole Professionelle to apprentice electrician. (This is different from Plenitude in that it is not a University program; the requisite is 5 years of high school, or Rheto which he has.

It is a very well known and respected school. Cost per year is about $1500. Will have to check length of program but know that all are co-op. Diplomas are awarded and valued.

For more photos of these and other students see pictures on the Starthrower site.

Once again, thanks to everyone for helping make this possible. And we welcome any and all initiiatives to continue to support these deserving young Haitians!

Sharon
Posted by Starthower Founder at 12:16 PM No comments: