Sharon Gaskell phoned this morning (Monday) from Cap-Haitien, Haiti. I hadn't heard from her at all in over a week, so she called to let us know that she is alive and well.

As she spoke, the sound of hammering made it hard to hear her at times. She explained that the house is being shored up with steel girders and is work being done on one corner of our center, and will progress to all corners. 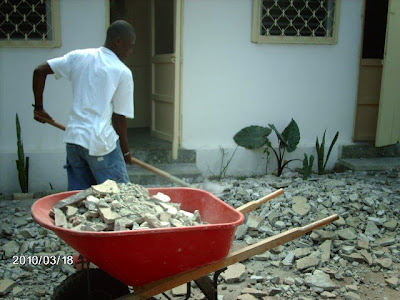 Repairs to Starthrower Foundations Center in Cap-Haitien Haiti
The house sustained more extensive damage than initially thought, with new cracks appearing as fast as existing ones were repaired. Some cracks are due to aftershocks and some from the initial quake on January 12, and some perhaps the result of the age of the building.

Now that the walls are being removed, and the basement is being dug out, the building foundation is being exposed. It's become apparent that cement block foundation is mostly rubble and dust, and that limestone had been added to the original cement blocks laid some 30 years ago.

Building materials and supplies, always hard to come by in Haiti, are in short supply, which slows the repair work.

Even without the quake damage, the house was increasingly unsafe. Rental options in Cap-Haitien are limited at the best of times; with the current housing crisis, they are virtually non-existent. 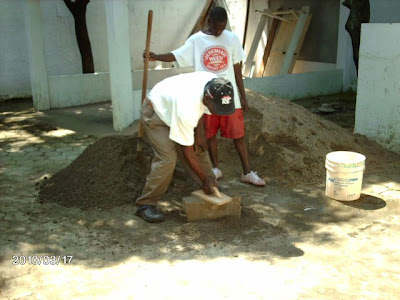 Haitian Students Work to Help Mason Repair Lakay Starthrower
Building Fund for a home of our own
The best case scenario, Sharon says, would be to buy some land in the area, and build a Starthrower Foundation center. With the house repairs taking so much time, Sharon has not been able to go view a parcel of land recently offered for sale.

"With the house being ripped apart, they can sit on the gallery, or on the patio outside. And with the walls opened up, the mosquitoes are everywhere in the house. Jack and Jocelyn are sick now, and I've sent Jocelyn to the clinic. I suspect malaria again. Jack is ill, but with other student workers sick and sent home, he has to stay to help with the work.

"The masons are working on house to shore it up with girders. So far, one corner is being worked on. The bulk of work is yet to be done. My best guess is the work will take 4-6 months to be completed. We are paying for the work but I have asked the landlord to pay for repairs, and I have said that if we do them, it is in lieu of rent for 6 months.

"I have been staying in the house, though if and when Frank says it is totally unsafe, I will sleep in the small building at the rear of the property. It's not ideal, but it has been repaired and seems safe." 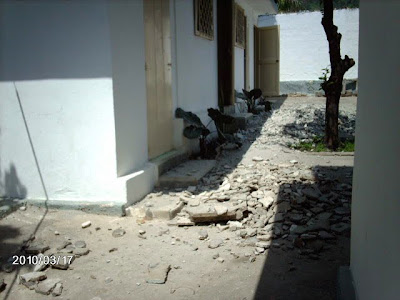 Haitian Workers Repair Quake Damage Cap-Haitien
Manifestations in Cap-Haitien
"With so much going on here at the center, it's better for me to be here than at a hotel in town. Getting back and forth from the hotel to the house would be a nightmare, as many Cap-Haitien streets are blocked while they are being repaired. And now, streets are also being blocked with manifestations (protests, demonstrations). The crowds are a nightmare.

"Auguste had gone into town on Friday afternoon, and called to let us know how difficult it was to get around. He said there were piles of burning tires, and crowds throwing rocks, and for me to tell the others to stay at the center until the situation improved.

"Part of the reason for the demonstrations is the food aid distribution program. There is absolutely no system in place. The food aid trucks pull up and start throwing bags into the crowd. The people are so afraid of starving, they mob the trucks, so the trucks leave. 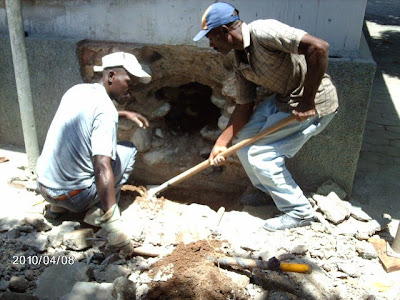 Bos Mason on Roof Opening Bedroom Wall Lakay Fondasyon Haiti
Hydro Food Water Propane
"For the past few weeks, there's been almost no hydro, as when work is being done on the house, it is shut off. Ice has been scarce, and for several days, we had none. Water is also harder to find. I can still boil water, but that's only good for as long as we have propane. Jack usually goes out to look for water, propane and supplies, but he's had to help work on the house so he cannot get out to look for any today."

Schools, Exams
"Some students have been back at school, and are into exams now," Sharon said. "No school for a whole term, and two weeks of classes, and they already have exams! These are the kids whose schools accepted our offer of payment for a half-trimest, and third trimest fees are due next week.

"The students who went to schools that insisted on full payment for the January-Easter term, even though the schools were closed, are not attending classes, and some students decided to stay out of school until September.  I think waiting till September would be best."

Back in Canada Dates
Sharon said that she is still planning on returning to  Toronto around May 8, but that time frame can change. The nursing student ceremony in Leogane is now set for May 12, and she would like to be there to support our students, but she may have to miss it.

Those of you who are waiting for responses to emails, etc. may have to wait a little longer. If anything is urgent, contact me, or phone Sharon in Haiti.