Student Update
Markendy arrived on Monday. He had finished his apprenticeship barber training more than a year ago, but now he wants to go back to school. Neither he nor Starthrower have any money to set him up in a shop of his own.

His boss (who trained him) needed the tuition we paid for his apprenticeship to keep his own business going. He can't afford to hire Markendy as a barber, but as long as we pay him, he'll give him work.

And while not being able to set up his own shop or to be subsidized by us is part of the reason he wants to go back to school, it's also a symptom of trauma: Like others facing the world outside, here in Haiti, the world of the classroom is much safer and more comfortable. 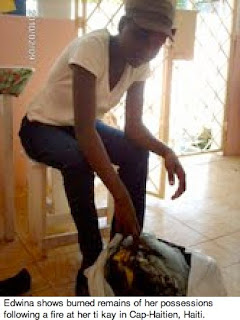 Staff arrived one morning with news of a fire in their katye (zone LaBoul). The ti kay in which Edwina lives caught fire the night before.

Everything inside was destroyed, but somehow the building is still standing. It was only about 3 ft. x 5 ft. and 4 people slept, cooked and lived in it. Thank goodness she was wearing her new glasses at the time.

Because it's very cool and damp at night, they had lit a candle (balen) for light and heat, then gone out to use the toilet. They lost everything.

So today, we start to replace their belongings, beginning with her school uniform: Purchasing material, finding a seamstress and getting a wardrobe for her in the market.

Between the earthquake and the fire, Edwina is back to communicating in a whisper, as she did when she first arrived here 4 years ago.

Cap-Haitien Schools, Fees, Home Schools
As yet, we still have no idea of the amount, or for which school fees are owed. One or two schools in Cap-Hatitien tried to open this week, with so-so success.

One school opened, but because 2 of the teachers had been killed in Port-au-Prince, the kids all cried so the staff, not knowing what to do with them, sent them home. I have seen reports that schools outside of Port-au-Prince are all functioning. Not so!

Rosenie passed by her school yesterday to find out when it will open. The secretary who handled everything was killed in the quake. Nobody had any information about when classes will resume.

A home school for the neighborhood started in the house across the street. We are going to start an English club for those wishing to fe pratik (practice). Modeline was so excited when she heard this, as she loves to try out English phrases.

Mme Carmene Family Relief for Port-au-Prince relatives
As I mentioned, Carmene, our cook, needs help with food and clothing as her house is damaged and she is trying to repair it and to support what is now a family of 12 people, all on her salary from Starthrower.

Carmene's widowed sisters and their children, ages 3 months to 17 years, lived in Port-au-Prince, and lost everything in the earthquake. Carmene also took in the son of her brother in Port-au-Prince who was injured and unable to travel, and others in family who might take him in are also injured. They sent him to Cap-Haitien because they expect to die in the street in Port-au-Prince, and want him out. He was in school there, in seconde which is 3rd last year of high school.

We have provided backpacks, shoes, vitamins, hygiene supplies and a few articles of clothing and some money, but that's not nearly enough to put 5 kids in school (uniforms, text books etc.) and feed 12 people. We can't even feed our own kids. While our daily meals continue, food sack distribution has not restarted.

So to help with their immediate needs, Mme Cindy in Pennsylvania arranged to send a Moneygram to them through me. And while it seems simple enough to go to a bank and arrange to collect the funds, this is Haiti. Nothing is that simple. It's taking several days and several cab rides and a walk to the closest Moneygram bank. I stood outside in line in 100F+ heat, then finally approached a (well-armed) security guard, as it seemed as if everyone in line had an account book.

I explained I had come to pick up a Moneygram and he told me they were not available today (pa disponib jodi'a). I asked about the main branch downtown, and he said they close at 2 p.m. or maybe earlier.This is true. Banks are keeping irregular hours but they do open.

So the next day I went into town to our usual bank, but unfortunately, I had only the pin number, not the Moneygram reference number, so I was unable to pick up the donation. I have secured the necessary information by email but will have to wait until Monday to go back to the bank as everything closed Friday for National Day of Mourning. Jackson, our taxi driver, could probably make a good living by driving exclusively for us!

Sister Rosemary stopped in on Tuesday to tell Carmene to send her sisters and their children to the Bureau of the Ministry of Education. They were to take any papers that prove they were from Port-au-Prince. They were told to take the kids to a certain school. Their understanding was that their school fees would be paid for by the government. Upon arrival, they were told by the school how much they had to pay before kids would be allowed to attend. Frustration and disappointment abound.

I can't imagine their difficulty and anxiety, dealing with losing everything, packed together in a house not theirs, dealing with 'bureau' officials, and getting around, let alone in the mud.

So those Haitians who migrated North are not finding it possible to access government support. These 2 families are fortunate they have family (Carmene) here but what a mess and what a terrible load for Carmene to carry. 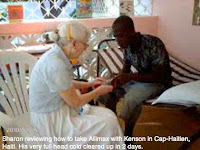 There was torrential rain all Sunday night, and on Monday, everyone was late arriving for work as their houses were flooded.

The rain continued off and on all week, so we had no chance to put clothing and already compromised mattresses outside to dry in the sun.

Even the vet cancelled our appointment as his place is flooded, too. With no sun for several days, I have been running on a small reserve of solar power and also charging staff telephones.

It's very cool and damp at night here. I know 65F-70F (18C-21C) is not 'cool', but when you're used to 120F (48C), it's cold when you sleep outside, or if inside, on earth or cement. And when it's not raining during the day, it's very hot. After several nights without hydro, the return of sunshine is welcome, and translates to solar power.

We had been trying for several days to go into Cap-Haitien to do the laundry. All it takes is a couple of rainy days and nights, and we have a mountain of slightly mouldering laundry desperately in need of professional help. Joceline went twice but Lave la (wash here) was closed.

Jackson (driver) said he'd pass by if he is in town and let us know the situation before wasting more time and gas driving to town and back. But this weekend, after it's rained off and on all week, and the laudromat appears closed for good, we've been washing a few pieces every day and hanging them to dry on the gallery after the kids leave. It's dispiriting as every day brings new laundry.

Plumbing continues to be a challenge. I woke today (Saturday) to a small flood in the half bath, and had to call Jack as the plumber was wrong about the Mastick stopping the leak. Thank goodness for sun and solar power today. I can put a lamp in the hallway outside the bathroom so he can see to figure out the problem.

The plumber will try to get materials and try to repair the leak today, but the water must stay turned off until Monday.  It's not like at home, where plumbers head for the hardware store to get materials. In Haiti, they find what they can, where they can, and improvise. I am certain that he was hoping the little putty job would work for that very reason. It's what he has on hand.

Vermin and Spider
We discovered that we have a rat in the Harry Potter cupboard under the stairs. It has gotten in to the newly arrived bags of dog and cat food. We took everything out of the cupboard using flashlight power and scoured it.

And the other night, I noticed that the kitchen wall clock stopped at 5:45, so I took it down to change the battery. (Oh, I have been away from Haiti for too long. Take NOTHING for granted and treat everything like a ticking bomb!) When I took down the clock, the back of the clock started to move. I literally threw it across the room, and a fil arenyen (poisonous spider size of a grapefruit) skittered away into the cabinet where we keep glasses and cups. I shut the cupboard door tightly, and the next morning Jack dispatched it. 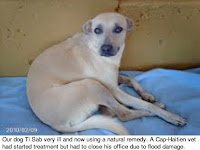 I started the sick pup on Allimax, as nothing to lose everything to gain. And due to the office flood, the vet is still not available to treat her.

Ti sab sniffed my tuna lunch the other day and was able to get that down. So to get her to take Allimax, I inserted the capsules in the fish, and down they went.

When we cleaned out the under-stair cupboard earlier this week, we found some tins of tuna, the last tins remaining from a larger gift 3 years ago. This seems a good time to use them.Thank goodness not everything was regularly cleaned out in my absence. Now we can also make tuna sandwiches for a change for lunches. She seems to be improving on the Allimax.

With post-trauma shocked Gaby (night security) finally deciding that he might be better off in the country, and that he would try to get to Sen Rafayel to stay for a while, to help his spirit heal. l now have Fresnel on night security, and I have the dogs.

I received an update from Jane in Georgia re: nursing school Leogane. Some informative post quake pictures on that site.

And to add to the list of Things We Need are protein bars, sleeping mats and light blankets.

Please keep sending prayers, positive vibes, good karma -- whatever works for you. We need them. The headlines have faded, the misery has not. Thank you each and every one so much.