We've been without ice for almost 2 weeks. Vegetarian lifestyle is the most reasonable option. And we ran out of propane last Sunday.

Staff had been scouring the city to find a refill tank. More important than cooking, we need it to boil the well water.

Jacques arrived from town on Wednesday with a full tank of propane. It took stops at 7 shops to find it, but we have it! The first shop was closed, and the next 6 had no stock.

They returned to the first shop to find it open and in possession of only 5 full tanks and about 30 empty ones, and that's it for Cap-Haitien.

We did manage to secure potable water for this week's distribution. Hurray ! And we finally got enough sun over a few days for solar power. 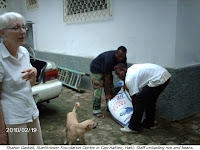 Rosenie and I prepared food sacks on Sunday and we distributed them all week.

This is in addition to the simple meal we provide each of the kids when they drop in.

They bring their gallon jugs for potable refills at the same time. Monday was crazy busy as expected as we resumed  food distribution.

Sherlyne wrote a note asking if we could lend her money to buy food as she goes many days without eating. This is the norm.

Instead of a loan I offered her a job on weekends helping Rosenie purchase and package food, oil etc. It frees me up and allows them to continue working whenever schools finally reopen.

On Tuesday morning, Erzilia also wrote a note (in French -- talk about keeping up with studies!) and then came in asking for work, so she will cover the office with Auguste on Thursdays and Fridays for a few weeks. 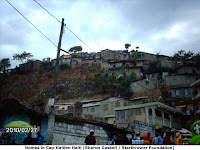 They'd gotten up at 4 a.m. to travel to Milot at 5 a.m. They were fortunate enough to each get a consult, as only 10 consults are done per day.

Adlyn arrived on Tuesday, after having had a circumcision (needed due to recurrring infections from bathing with dirty water) to bring us his prescription forms.

Rosema also arrived Tuesday, having come from the clinic. He'd been back and forth 3 times, walking each way, each time, and he is so sick. I diagnosed malaria but waited for the experts to agree. I don't want to give him something he doesn't need. Unfortunately my diagnostic skills are quite accurate. At least we can treat it.

We continue to have success with the natural product Allimax that has an antibiotic effect. I Am NOT a paid spokesperson; I just have had success personally using it and now here with the kids: The stubborn wound on Jack's arm closed in 3 days, and he did not need an xray as the pain disappeared, and the arthritis he has in his joints is now gone for the first time in years.

Rosenie's chest infection cleared up and our pup is still alive and showing signs of improvement (when I can slip the capsule into her food).

Many of our young people suffer from arthritic complaints from sleeping on the ground or on concrete. Even with funds for beds and mosquito nets (though the students would be more comfortable), they would still have joint pain.

I always feel so badly sending kids for day surgery, dental surgery, etc on public transit over horrendous road surfaces, knowing the discomfort and often pain they experience. Someday we will have a vehicle. But for now we do what we can with what we have. 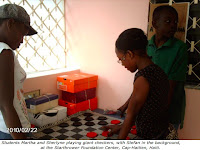 Everyone is in need of shoes, as well. We provide a new pair in September and January.

Although school is still on hiatus, shoe leather wears out at the same rate here.

Roads are non-existent for the most part, or else a series of various sized potholes joined together in an intricate pattern.

As it is the rainy season, the constant mud also takes its toll. Everyone needs black dress shoes but everyone needs different sizes and feet, like teeth, continue to grow despite a life of abject poverty.

Since schools are still closed, they actually have the luxury of taking their time going through the marketplace looking for shoes.

Aftershocks Aftermath
Aftershocks continue, and you get to the point where you don't want to say anything because maybe you're the only one who felt it. Wisly and Alland came down from Sen Rafayel to talk. Together, they speak not a word about the earthquake trauma. Separate them, and stream of consciousness pours out.

Intellectually, they understand that the trauma of their experience at the nursing school in Leogane will fade, although it will always be a part of them. Emotionally, they are still very much in the middle of it. What each talks of independently is the courage of the Doyenne, Mme Alcindor. She is their hero, holding them together and turning them into clinicians.

Thank you For Supplies 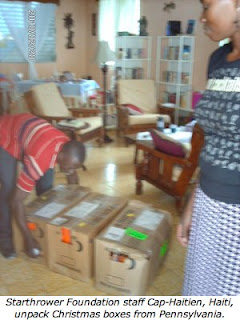 Thanks to Mme Cindy and elves in Penn!

Jacques (staff) discovered that the baseball cap (kepi) he received in his bwat nwel (Christmas Box) has a miniature flashlight embedded in it.

As there is still little and intermittent electricity, he's very grateful from a security standpoint, and it's hands free!

Mme Cindy also sent chocolate chip cookie mix, so the kids will have a treat. There is no margarine in sticks available in any of the markets, so we're trying a pouch margarine from Indonesia which came to us via the Dominican Republic.

Our biggest challenge when cooking is a having to use a 6-year-old propane stove which has no temperature settings, only a series of dash lines between min & max. We frequently overcook food and oft times undercook, making everything oven cooked an adventure.

Thank You to Nadia and Daniel from Toronto, for turning a holiday into an opportunity to send supplies to us. They had come to Orangeville in January to help pack a bag of donations stored in my apartment, and  packed a few more bags with their own. They were travelling to Provo, Turks and Caicos, so they took all the bags with them to Provo, then sent them to us via Air Turks and Caicos. Thanks again!

Haiti, Canada, Chile
It's been a month since I returned to Haiti. The comparative luxury (electricity, flush toilet, blankets and bed) of my modest one bedroom apartment above a store on main street in Orangeville, is difficult to picture.

I had forgotten the smell of burning tires, the ferocity of storms during the rainy season. On Thursday, the winds started mid afternoon and howled all night long. Many toll roofs have been blown away.

I'd almost forgotten how incredibly difficult life is here in Haiti, and the immense courage of the Haitians.