Whenever we've been without electricity for a few days (in this case since last year!) I never know what to do first - the dance of joy? iron that pile of clothes? pump water?  toast bread? make coffee? plug in modem and router? write a blog?  As the duration is always a mystery, I usually take a couple of moments to savour the transition  - tonight from candlelight to bright lights and internet.  Although candlelight has its moments, give me electricity for work.

At the moment it's here and it's good to have the opportunity to touch base with you. New Year's greetings.

2012 arrived at Lakay Fondasyon  much the same way 2011 arrived - competing celebrations, each with amplifiers  which probably carry to Port-au-Prince, sporadic electricity and gunfire interspersed with  periods of rain. The rain hasn't stopped, playing havoc with our solar needs.
I had thought about a pictorial look back at 2011, but upon reviewing last year's photos, I changed my mind. Who wants to look at a dozen different pictures of us stranded on the mountainside?  Could we put out a calendar - is that a fundraiser or what?

Sad but true the fact that we were stranded an average of once a month on the side of Granjil mountain  --  our truck  losing the war the mountain wages against all trespassers. Granjil won the last battle - our truck is still out of action  --anpan -- and continuing heavy rains have kept our mechanic Danius from coming to Cap-Haitian  for repairs. It also prevents us  delivering construction materials and checking in with staff. 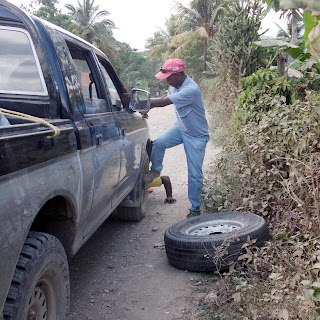 Our enthusiasm was not dampened and in April , after many negotiations, we purchased.  May we cleared the land and construction began in June.
It has not been an easy year. In August, Jack left our staff and the project. The learning curve has been very sharp and too brief.  Our staff grew as well, as Solange and  Edeline joined Fabiola and co-ordinator Guerlande in the office and Wilno and Vilsaint joined Kesner in security. What a team!
With staff comings and goings it seemed for a time that the only constant was change, but for a moment I forgot the grinding poverty.  Now there is a constant.
Thanks to Mme Cindy in Pennsylvania, every one of our secondary students received Christmas gifts, and thanks to the wonderful turnout at Acheson's (Orangeville) fundraiser Dec. 8th, everyone received rice, beans and cooking oil for Christmas day. Thank you Dianne and staff, Cindy S. and event coordination team and Danila and staff from Scotiabank. What a day. Thank you also to the many folks who came out to meet, talk, and purchase. Mil Mesi also to the wonderful new sponsors. It was delightful to have one-on-one time.

2011 was a year of arrivals and departures --many new faces, among them Phana the newest member of our 'Vision' club.  She's ready for January term with new glasses.
Evaldine and her sister Kencia lost their mom. Mme Clothilde died Sept. 1st., leaving the girls orphans, never knowing that Evaldine had just successfully completed Philo. She was 20 years my junior.
Inea and younger sister Dina wait - wait for the bulldozer to break down the tikay we've been renting for them since July. Their tikay has been marked for demolition by the state in conjunction with the new airport.

As of to-day, Mme Carmene is on indefinite leave, under too much pressure not knowing when her home will be destroyed (her house has been marked too). The thousands affected by this thoughtless, unnecessary bureaucratic nightmare are all trying to find new places and new ways to double and triple up in the homes that remain standing. The challenges continue. Housing is always a priority.

While the revelry which takes over the upper and middle classes for two weeks beginning Dec. 24 continues, Edwina spent Independence Day  (Jan. 1st) in the emergency ward at Justinien Hospital. Auguste didn't want to disturb me on my one day off so he spent his holiday in the hospital with her. It will take until to-morrow to get the results of lab work.

Nursing student Brunie dropped in although we were closed,  as she is writing exams this week and just has  no other time. The day after exams she begins her practicum at the hospital here and needs new shoes and uniforms as well as travel expenses.

Jhennie, Elorge and Marlene were in from Santiago for second term fees. All are in third year.

Saturday we sent Rose-Guerlande back to Santiago to write entrance exams to study dentistry. She went with a new lap top donated by Eugene in Ottawa. Although Rose G. is without sponsorship, something will materialize.  Haiti needs dentists as desperately as clean air.

In closing, the staff and I wish each of you the blessing of beginnings - may this year be the start of whatever you most need for healing, health and happiness. From the steps of our new Jasmine Centre in Sen Rafayel n'ap swete w bon ane.


A New Year means renewal, and I choose to begin 2012 with hope - and a commitment to continue changing the world in whatever way I'm able. How about you? Everyone who reads this has the ability.  What is your path?  Jack Layton's letter to Canadians, written Aug. 20 just 2 days before his untimely death says it so eloquently:

" Love is better than anger.
Hope is better than fear.
Optimism is better than despair.
So let us be loving, hopeful and optimistic.
And we'll change the world."
Beni-w
Sharon
Lakay Fondasyon (Foundation House)
Cap-Haitien
Posted by Starthower Founder at 10:29 PM No comments: