This is the third concerted effort to put to-gether an update.  The first responded to the cholera outbreak, the second the impending Siklon Tomas (Hurricane Tomas).  As we no longer have internet service at the centre in Cap-Haitien and the supporting solar/inverter is in need of new battteries, communication with the staff has been sporadic and frustrating.  To send an email, Auguste must first of all call in staff to cover for him.  No easy matter over the past week as I have been unable to get a phone line into Cap.  Then he makes his way to town and searches for a cybercafe which has a signal, functioning generator or EDH (Electrique d'Haiti).  While we never took the gift of internet/solar power for granted, we are acutely aware of its loss.

The first and last communication came Thursday.  I had sent a list of jobs to be done before the storm hit, including filling the water chateau and tying down anything that could be lifted.  Below - Jack on roof with water chateau and solar panels. 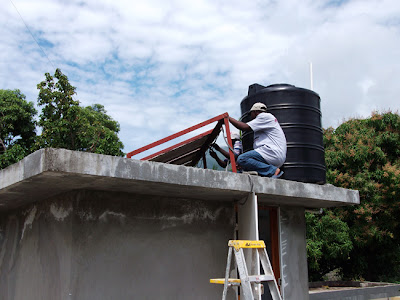 Prior to Hurricane Tomas passing through, we were concerned about finding the funds to continue to support our post secondary students.  Now after seeing reports of the flooding in Leogane, thoughts again are in survival mode.  No mention in news reports of how the North fared.  I will be so glad to be back next week.  Although communication will remain a challenge, there is peace of mind being on the ground and knowing where everyone is.  The rainy season will be upon us, heightening the potential for rocks and mudslides.  Thank goodness for our 4 wheel drive vehicle. Below - the road to Sen Rafayel during the dry season. 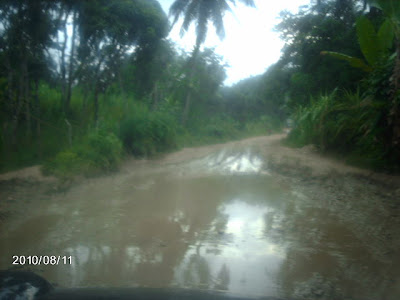 Daniel here: I've taken the liberty of including sketches from my sketchbook that I did in September on our way to Sen Rafayel.  Sure was a bumpy ride...

So many things on the list for November but again we wait to hear from everyone, begin clean up and if necessary start again.  The patience of the Haitian people seems to be rubbing off - what a blessing.  Will send a post script as soon as I hear from Cap.  Packing is always a reflective exercise for me.  As I pack, weigh, repack, reweigh, those with whom I have crossed paths during my stay come to mind.

Many thanks to Jeff , Pete and Signe of 'In The Hills' magazine for the time and conversation.  I appreciate being included in the upcoming edition.  Thanks also to Don and the Optimist club for a warm welcome and insightful questions.

Last year, Diane, owner of Achesons in Orangeville, opened her doors for a fundraiser and this year has jumped in again to support our young people.  Thanks Cindy S. for your organizational skills and for assembling a great team.  I know the day (Dec.2) will be a success.  Although I won't be in the country, Starthrower will be represented by our web administrator Daniel Lafrance.  He will be there signing copies of his graphic novel "Starthrower in Haiti".  As he is fresh from his visit to us, he will be able to personalize the work we do in both Sen Rafayel and Cap-Haitien.

Thanks also to those who have commented on the new web site. Your feedback is important.

And last but certainly not least, thanks to Deb, Sue and Janie, owners of Mochaberry coffeeshop.  On more than one occasion, they very graciously let me spend long hours over my sandwich and coffee while working with Dan to get the new site up and running.

More later as I hear from staff.

PS. I have just received emails from Alland in Leogane and Auguste in Cap-Haitien. They are safe. As of this writing, the road to Ti Goave which our nursing students in Leogane must take for their nursing practicum at the hospital is impassable because the river has broken over its banks, flooding all in its path, forcing road closures.

We have had no communication with Sen Rafayel as of yet, nor have we heard from other students in Port-au-Prince, Limbe, Cap.
Posted by Starthower Founder at 2:39 PM 1 comment: