Toward the end of "The Poisonwood Bible", author Barbara Kingsolver writes of "...if...would have...but instead...all because...every life is different because you passed this way and touched history." (pg. 538) It may be history which is never written, published or discussed, but that doesn't make it any less important. Monumental journeys often remain anonymous. What speaks to me so in this quote is the understanding that it works both ways - the lives I touch are touching mine, the lives you touch are touching yours. There are so many lives here waiting for someone to pass this way. 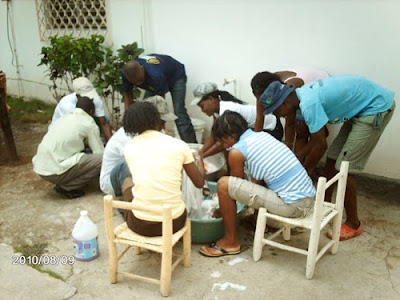 Our work week began last Monday (August 9th) with a communal laundry "konbit" (work group). Everyone had left in a hurry Friday and the consequence was a staff change room that took on the scent of a locker room. Wednesday, we made the trip up the mountain again to Sen Rafayel to paint the interior office space and begin to bring the new staff members up to speed. Although the rain which followed us down at day's end hadn't presented itself, mud was already present. Then around a corner, a small dancing waterfall, running over onto the roadway, creating deep crevices in the already tortuous route. 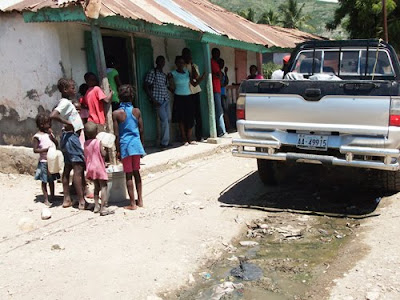 Although we are not yet open for business, the office was full and spilling out onto the gallery. There were already 100 names on our active waiting list - "active" meaning we have checked birth certificates, report cards and payment cards and have taken a family history (50 in Cap-Haitien and 50 in Sen Rafayel). On Wednesday another 35 presented us with letters requesting school support.


Fabiola, Illiomene and I began to sift through the requests, checking names against the existing list, as the rest of the staff painted walls around us. Auguste was outside working crowd control. The letters requesting assistance for secondary school and university were written mostly in Kreyol, some in French. Instead of sleeping that night, I read letters. I have re-read them many times.

These are some of the lives waiting for you to pass this way. I'm translating, of course:

Berncy asks for help to complete the last 2 years of secondary: "Rheto" and "Philo". "There are 4 children in my family. I'm the oldest. My father has been dead for 5 years, it's my mother who suffers/is living through the hard times with me ("pase mize ave'm"). Only I have gone to school, and I have to stop now because of our situation."

Mirlene is entering 8eme, the 2nd year of high school. "I'm asking because I don't have a mother or a father - they're both dead for a longtime. I love school and want to continue. Someone ("yon moun") was paying for me but stopped ("abandone") and I can't get my report card. I wait for your reply, in tears ("M'ap tande kriye"). "

If Vermer has passed the State exams, he will enter the final year of high school. "I'm writing you because I find myself in a difficult situation. My mother has been crazy/ mentally ill for 3 years ("twa zan fol"). My father is handicapped. I have a good friend who secured a bursary for me last year. I know you have a good heart and will not let me waste away ("peri")."

Jesumene's father "has been dead since I was 11. My mother has had great difficulty paying for me and there is no possibility I can continue. I would enter 9eme (third year of secondary) in September. I promise you, you will not regret helping me."

Marie-Rose writes that she was "at school in Port-au-Prince when the earthquake passed. An uncle was paying for me because my mother and father are dead. My uncle was killed and I am back in Sen Rafayel. I was in "Rheto" (second last year of high school) when everything stopped."

An aunt of Enecharles was paying for her year but everything stopped Jan. 12.  Maxime and Mikendy are cousins, supported by an uncle who was killed Jan 12.  And on and on they go.


Saturday, the staff made the trip up the mountain again to Sen Rafayel as Vilsaint is scheduled for hernia surgery Monday in Pignon. We had to deliver the funds to him. While there, they painted the outside of the new office. It was completely unscheduled, but Auguste returned with another 22 letters.

We have been without electricity (and ice) since Thursday. Heavy rains every night. Just enough solar power to run the fridge for a few hours a day. Today, we had electricity but no internet signal until now. While the ideal would be to put out a blog when everything is fresh, the ideal doesn't happen here very often.

"Every life is different because you passed this way and touched history."

Have a good week.

Sharon
Posted by Starthower Founder at 8:52 AM 3 comments: