Up and down the mountain

It seems climate change has arrived in Haiti. With the exception of one night, every night of the 3 weeks I have been home has been an adventure in weather - rain, wind, thunder, lightning. Both pictures were taken after about 30 min. of rain which continued until morning. I have no idea what happened to the rainy season. It didn't show up when it was supposed to and this is not it.

Daytime temperatures well above 100, yesterday real feel 122 (50 celcius) combined with the wet nights make for a bad mixture of mosquitos ( marengwen in Kreyol ) and malaria. Frequent electricity outages in Cap-Haitien make a bad situation worse. In the village, we are still not on the receiving end of hydro.

When we arrived in Sen Rafayel this week, student part-time staffer St. Luc arrived for work about the same time, presenting symptoms which turned out to be Malaria. We began treatment and kept him. Sending him home was not an option as the rain had begun and was too heavy. On the way down the mountain we played ' find the hot telephone service  spot' with Cap coordinator Lusnot, He was calling to tell us Paudeline had just returned from the clinic with a Malaria/Anemia/UTI diagnosis.

Fortunately we passed a very small but well stocked pharmacy (famasi) just past the airport so were able to pick up Chloroquine/Vitamin C / Fertone and Multi vitamins. We still have an adequate supply of Allimax on hand so were able to begin treatment for everything immediately. Our protein powder supply is finished but it made a great difference for a while.
No time is a good time for a malaria outbreak but we are in exam mode so this is particularly bad timing. Grades 7,8, 3 eme and 2nd began writing the 10th of June. State Nationals for 9eme will be written the last week of June, followed by State Nationals for Retho week of July 1st, Philo week of July 8th. Sen Rafayel center is open 7 days a week,  in Cap we have reopened Sundays for those who need some extra tutoring.

Once results are in for State Nationals, those just on the pass/fail line will have a chance to rewrite in September (ajoune) 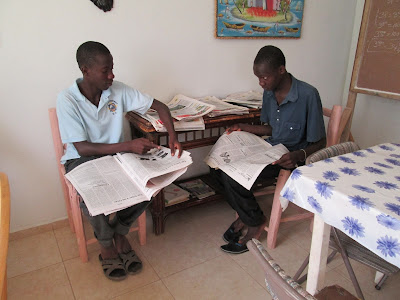 In addition to study mode, May is our admission month. During May we accept letters from students who have been unable to attend school for at least the current school. Of the 500 letters we received during the allotted time ,  nearly 300 had legitimately been out of school. (There are always dozens delivered after the deadline but we do not accept them. Our resources are already limited and because of limited finances, we'll only be able to take in about 10% of the applicants.) The other 200 applicants  had lost or were in danger of losing their support and did not want to sit out. It takes every staff member many hours to read through the letters, highlighting the appropriate information which will lead to an interview or rejection. Someday we'll have the resources to say yes to everyone

That nightly thunderstorm I mentioned earlier decided to arrive in the afternoon to-day. I've sent the staff and kids home as the wind is making airborn missiles out of usually earthbound objects. Again there is no electricity so this laptop battery and Natcom 3g WIFI stick have performed admirably.

Have a great week
Sharon﻿

Posted by Starthower Founder at 9:23 PM No comments: