2 a.m. The storm has abated and hydro has arrived. While I will not hop out of bed and iron clothes, although the heat has dropped somewhat and my bed no longer feels like an electric blanket set on high, I will try and assemble some thoughts on our trip to Leogane July 1-3. It will take more than a blog, but it is a start. The dogs are restless tonight, (toumante ko li) and I guess I am as well. I have been since the trip through the south. 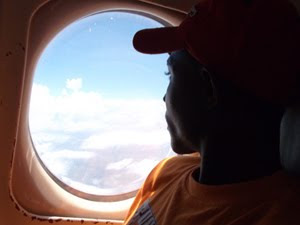 We set off on a high note as this was the first time Auguste had ever flown. He seemed to regard the 45 minute departure delay as part of the adventure, and was spellbound for the entire 30 minute flight, seeing his country from a very different perspective. Once on the ground, another delay connecting with our driver, then finally on our way. 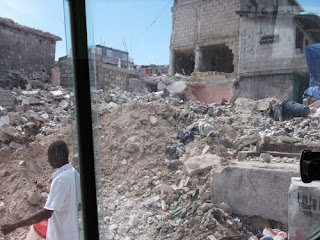 The high spirits generated by the flight experience quickly gave way to shock, disbelief, silence as we drove through downtown Port-au-Prince, a city I no longer recognized. In place of homes and businesses, endless piles of broken concrete and twisted rebars everywhere we looked - monuments to the countless, unnamed who remain buried beneath the rubble. What should have been hopeful I found disturbing - signs of rebuilding, albeit on a small individual scale, the white "sand/limestone" that caused so many deaths - was again being used - it was the only available building material. 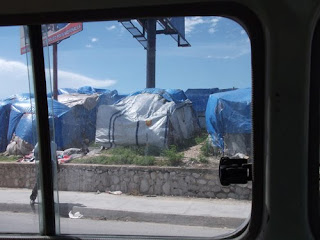 Heading out of the city onto the highway, a sea of tents covers every available inch of space, most homemade, pieced together with whatever could be found. They line the sides of the highway, the median of the highway, packed together, no personal space. The road surface itself is buckled and heaved, and seems as though a giant knife has sliced through it is many places. Now I understand why the international community was unable to get to our kids for 5 days after January 12.  The visual of tents was relentless - with us from Port-au-Prince right in to Leogane.

Our destination was unexpected - the now unused L'Hopital Ste Croix. Another 'first' experience for Auguste - sleeping in a hospital bed. The guest house and home of our hosts, John and Suzi had been destroyed, sparing their lives, although another story of heroism and rescue is there to be told. Part of the hospital is structurally sound, so they have set up shop inside, welcoming us and showing us plans for rebuilding the hospital, making it once again a vibrant part of the community. But for now the community is in tatters. 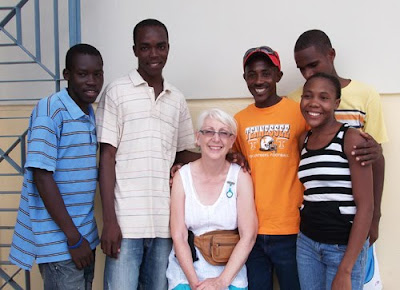 Our nursing students, Alland and Wisly on the left, Gaby and Brunie on the right, welcoming Auguste and myself in Leogane. 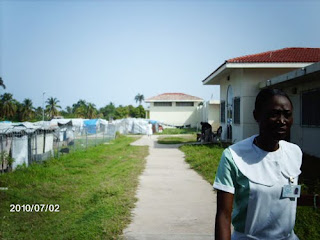 After much needed rehydration, we headed for the nursing school to see our 4 students, each so excited at the upcoming ceremony, more at ease with life than I had seen them in Cap Haitien as they struggled with Post Traumatic Shock. It's still there but they are so busy, it's either being kept at bay or worked through. Time will tell. They are still living in tents, although the field hospital has moved out of their school and is now set up in tents adjacent to the school.

The juxtaposition of sleek new buildings (the school is being used for classes) and tents took my breath away. How and when will this ever end? I talked with some of the children in their tents, signs of malnutrition obvious. An 11 year old doing laundry as mother is ill. A cooler filled with items for sale but no ice or electricity to cool anything. Curious goats and a "plein aire" art gallery. 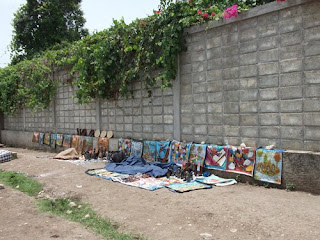 The next morning, a few feet away, a subdued yet joyful ceremony unfolded, acknowledging the struggle of the year not yet past, the loss of 3 students and thousands of community members, and the hope of a future in a profession Gaby, Brunie, Wisly and Alland have come to cherish. The capping ceremony (kwaf-la ) was held in the courtyard, covered with huge pieces of tenting to protect us from the sun, giving everyone and everything a blue cast. The church had been destroyed, but Haitians rise to the occasion and find another way. 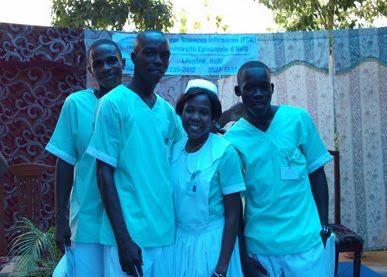 I am always proud of our young people, but never more so than I was that weekend, watching in awe as they took on the reponsibility of serving their communities and country in a profession that has already changed their lives forever.
As we headed for the airport early Saturday, Auguste pointed out the Statue of the Crying Woman, new to him. When originally erected, it served as a reminder that children were dying needlessly and mothers were weeping for them. Now the statue's presence is even more poignant, as she cries for the increasing number of those lost. Reliving the visit moves me to tears - not just the late (early?) hour but the immensity of the task undertaken - to support these amazing yet vulnerable and fragile young people as they continue the journey we have embarked on together - you, me, them.

We will revisit Leogane - it seems to be calling to be the home of the southern post of Lakay Fondasyon Sant-la. The faces of the young people - proud, defiant, fearful, joyful - still young but aged irreversibly by the events of 2010, are calling out.

And this being Haiti, the hydro left at 3:15 a.m., as quickly as it arrived. Morning now, a little solar energy before I start up the fridge, time to let go of Leogane as staff and students arrive. Thank you to Jane in Georgia for connecting me to the HSC Guest House, John and Suzi for taking such good care of us, thank you to Jamille and Michele, nurses from Pennsylvania who gave so much to our kids at the nursing school, and to the amazing Mme Hilda, Doyenne of the school, words are insufficient to thank you for the care and encouragement you have given and the courage and leadership you demonstrated through these past 6 months. You are truly one of Haiti's heroes.

7:20 a.m. someone is knocking at the portay - it's Paulaine on her last day of school. She has come to pick up the icing sugar we bought for her baking test, to present me with the pizza she made this morning as a thank you, could she please take a shower, and do I have a tooth brush and toothpaste as her's are finished?

I am having pizza for my 65th birthday breakfast.

Sharon
Posted by Starthower Founder at 9:58 PM 3 comments: Links to this post